What Is A Bitcoin Block Explorer? 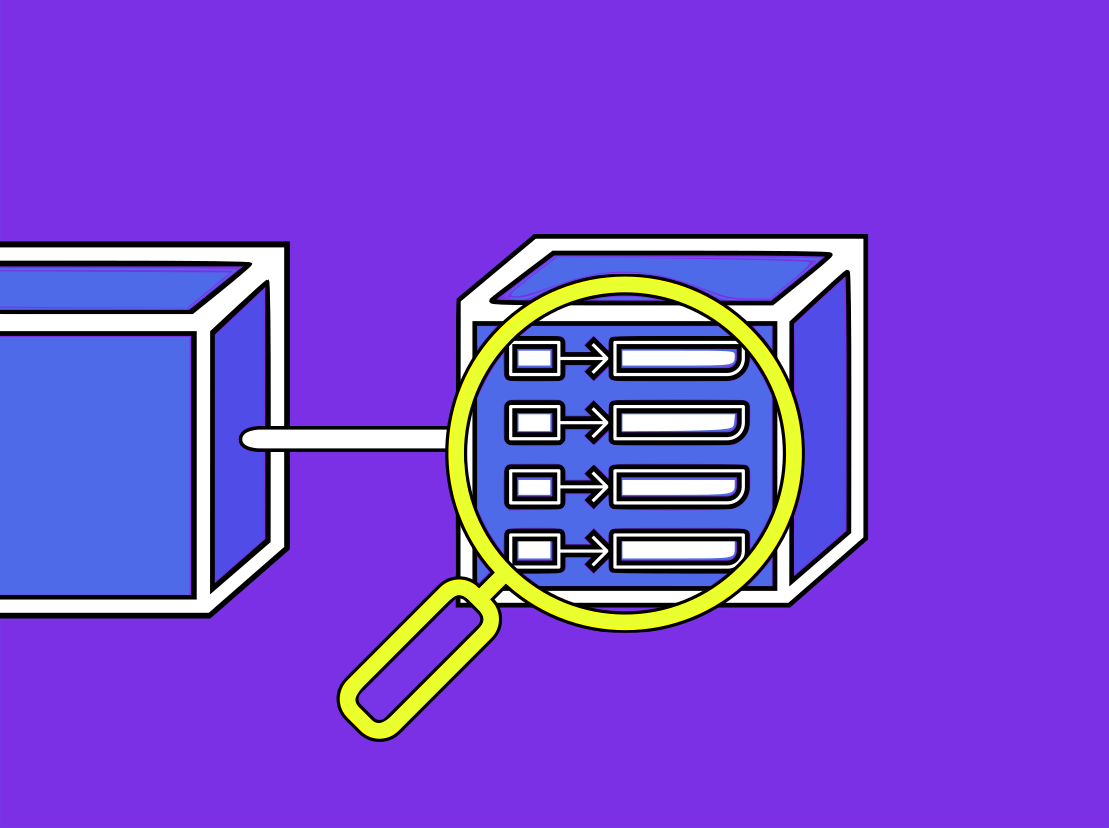 What is a Bitcoin Block Explorer?

Definition: A bitcoin block explorer is a tool that lets you easily lookup your bitcoin transactions in the bitcoin blockchain. It is also sometimes referred to as a blockchain explorer.

Block explorers might be a little different from a cryptocurrency to another, but for any cryptocurrency using a distributed open ledger, they all essentially serve the same purpose. They provide a practical interface to retrieve the data stored on the open ledger. Most basic explorers let you browse a specific transaction, public address or look up an entire block in the blockchain. They are pretty useful to check the current status of your transactions, explore the transaction history of certain coins or more generally get familiar with the inner functioning of a particular blockchain.

Some block explorers display more advanced data and statistics on the transactions or on the current state of the blockchain and network. For example, some Bitcoin block explorers let you browse pending transactions in the memory pool (aka. mempool) which are waiting to be picked up and confirmed by a miner. They might also provide summary statistics on the fee rates paid on the network (average, median, total, etc.). Those come in handy before doing a transaction to see how busy the network is and estimate the fees you need to pay for a transaction. Or, if you’ve already made a transaction they might give you an estimate of the time it will take for your transaction to get validated given the fee rate you selected.

Takeaway: A bitcoin block explorer is the perfect spot to find all the information you need on your bitcoin transaction...

What makes a good block explorer?

Block explorers have existed for a long time and, as with a lot of tools in this space, have evolved a lot over the years to offer new features, nicer looking UIs and an overall better user experience. For a block explorer to be considered good nowadays, they should be strong in the four following criteria:

How is a bitcoin transaction structured?

A bitcoin transaction can be broken down into two core elements: an input set and an output set. Each element in the input set represents a certain amount of bitcoin stored on a public address, also referred to as a public key .An input can only be spent by someone who has the key to prove the ownership of that input. This key is often also referred to as the private key. A public address can hold several of those inputs at once and all of them can be spent with the same private key.

If you like analogies, you can think of the inputs as being bitcoin nuggets of different sizes all locked in a treasure chest (ie: public address). Then, whenever you wish to make a transaction you need to use your chest key (ie: private key) to unlock one of the nuggets. Since those nuggets are digital, they can also be split in any way you want, much more easily and precisely than a gold nugget. However, bitcoin nuggets cannot be split without recording the split in a transaction!

The reason behind this is fairly simple. For proper accounting, every bitcoin transaction must follow one simple rule: the sum of the inputs must be equal to the sum of the outputs. But, if you were able to split a nugget without recording it on the blockchain, the above rule would not hold true and the whole bitcoin accounting system would fail.

Therefore, the split must be written on the blockchain. For practical and economic reasons, this nugget splitting is usually done by your wallet in the same transaction. For example, let’s say you hold two bitcoin nuggets worth 1 bitcoin each and wish to send 1.5 bitcoin to your friend. You (or in most cases your bitcoin wallet) must actually place them both in the input set and build the transaction such that one of the inputs, worth 1.5 bitcoin is sent to your friend and the remainder 0.5 bitcoin is sent back to you (see illustration below). This remainder is commonly referred to as the transaction change. 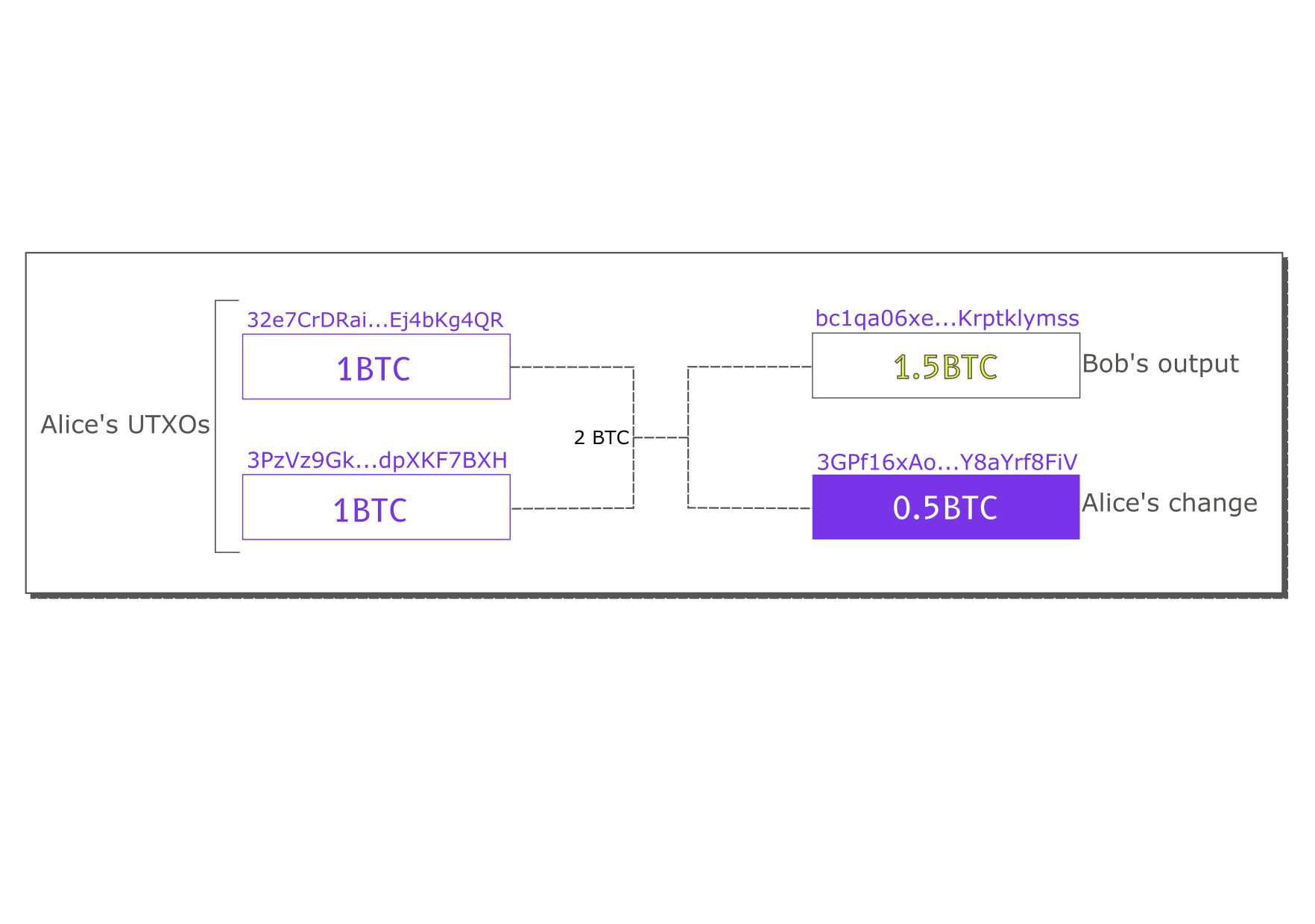 So, to recap, here’s what gets written in a bitcoin transaction:

Note: just like with a gold nugget, once you pass it on, it no longer sits in your chest. Instead it sits in the chest of the person you gave it to. This means that, just as we mentioned above, only the person who has the key to the chest can claim that the content locked in the chest is his. If you lose your key, even if you claim that chest to be yours, you have to way of proving it. Thus, not your key, not your bitcoin…

Sometimes, when reading some bitcoin guides or wallet reviews, you might hear of the term UTXOs being used. This stands for Unspent Transaction Output. As a consequence of the rule mentioned above (ie. sum of inputs equals sum of outputs), bitcoin users can be certain that the outputs of a transaction which were not included in a future transaction, can still be spent. Therefore those outputs are called unspent. In essence, the sum of all the unspent transaction outputs is equal to the bitcoin circulating supply. Transaction inputs and spent outputs are all just records on the bitcoin blockchain, the “real” bitcoins are all UTXOs.

What transaction details does a bitcoin block explorer show?

There are many different bitcoin block explorers out there and each shows more or less details. However, for the most part, all of them display the following basic transaction details:

Let’s go over them in a little more detail.

Transaction hash: a random string of characters used as a transaction’s unique identifier

**Block height: ** when a transaction is confirmed by a miner, it means it has been successfully added to a block in the bitcoin blockchain. That block has a block height or block number specifying how many blocks after the genesis block (aka block 0) the block was mined.

Datetime: time at which the block, and this transaction was mined

Size Units: each bitcoin block has a transaction size limit of 1mb. The size units refer to the units of space taken by the transaction in the available block space. Each weight unit represents 1/4,000,000th of the maximum size of a block.

Transaction inputs and outputs: the input and output amounts (explained in detail in the previous section)

Fee: for each transaction, the sender pays a small fee to the miner that will validate it. The fee is calculated based on the fee rate chosen by the sender (or by his bitcoin wallet) and the size (in kilobytes) of the transaction. The fee rate is usually expressed in satoshis / byte, satoshis being the smallest unit of Bitcoin (worth 0.00000001 bitcoin).

Why size matters: bitcoin miners don’t validate individual transactions, they validate sets of transactions to build an entire block. Since each block has a size limit of 1MB, miners can only include a limited number of transactions in each block. Therefore they take into account both the fee rate and the size of a transaction to optimize the total fees they collect from a set of transactions.

How is a bitcoin block built?

A bitcoin block is essentially just a group of validated bitcoin transactions. They are constructed by a bitcoin miner and appended to the bitcoin blockchain after successfully solving the cryptographic puzzle that verifies a set of transactions are valid.

If you’re curious how such a block is mined, we explained the process in detail in this article:

What is bitcoin mining and how does it actually work?

And if you prefer a visual explanation, we also made a infographic summing up the most important steps:

What block details does a bitcoin block explorer show?

Once again, each block explorer displays more or less details on the blocks, but the following key block elements appear on pretty much all of them:

Here they are displayed in the Blockchai block explorer: 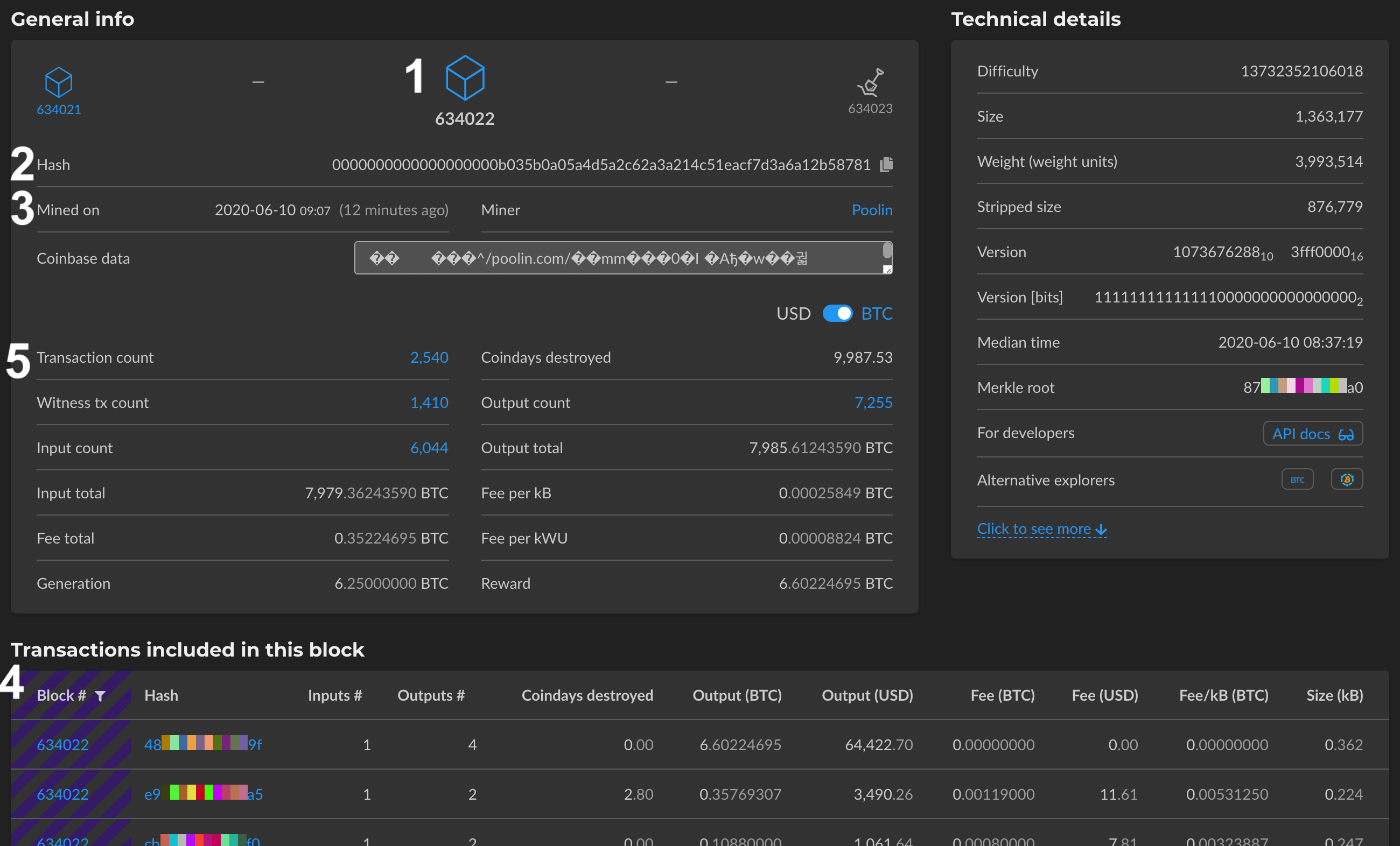 Some block explorers provide additional helpful block statistics such as the total number of transactions, the miner of that block, the sum of all fees collected by that miner, the average block fee rate, etc. Soon, we will be realeasing our ranking of the best bitcoin blockchain explorers. Sign up to our newsletter or follow us on Twitter @cryptotesters to find out which block explorers have the most detailed overview of the bitcoin blocks and transactions.