Give Paxful a try

Paxful is a bitcoin peer-to-peer marketplace that stands out for having a pleasant user experience and a vast array of payment methods.

Paxful is an online marketplace which allows buyers and seller to meet online and trade bitcoins. Unlike most bitcoin exchanges, that match buyers and sellers in an automated process, Paxful allows users to communicate directly. Its sellers offer a wide variety of payment options and the built in escrow makes the process secure. Similar to LocalBitcoins, Paxful allows a wide range of payment methods and buying options which can’t be found on traditional exchanges.

While Paxful is a younger platform than LocalBitcoins which has been about since 2012, it is slowly but surely overtaking LocalBitcoins in terms of users and trade activity.

Although everything seems pretty neat there are still some things you’ll need to look out for, like how to avoid scams and get a decent exchange rate (see details on both below).

Founded in 2015 with offices in multiple cities around the world (HQ is in the US) and over 200 employees, Paxful aims to be the “eBay” of the Bitcoin community. Paxful enables individuals to become merchants and sell bitcoin online, similar to how eBay allows people to sell merchandise. Paxful also offers a great alternative for buyers, since sometimes traditional exchanges just don’t cut it. While most exchanges suffer from geographic restrictions or limited payment methods, Paxful is free of both, giving the power for trading Bitcoins back to the people and allowing for a more decentralized trading market. Notably, Paxful is very popular in Africa where traditional exchanges have been slow to emerge.

How to Buy Bitcoins on Paxful

The first thing you have to is find an offer that suits you. To do that, filter for the currency in which you want to pay for the bitcoins as well as the payment method you want to use.

Once you have found an offer:

It’s worth mentioning that some trades can be concluded instantly while others might take longer, depending on the payment method and whether the seller is online or not. Paypal and gift cards, for example, are almost instant. Bank deposits, Western Union and Moneygram can take some time, as you must leave your home to their branch to deposit cash.

Is it safe to buy bitcoin on Paxful?

To make bitcoin trades secure, Paxful provides an escrow service. Once a buyer finds a seller and the offer is accepted by the seller, the Bitcoin are automatically moved from the vendor’s wallet to an escrow account.

At this point, the seller can’t cancel the trade and it is secure to pay for the Bitcoins. However, as the buyer you have a limited time frame to deliver the money to the seller and mark the payment as ‘complete'. If you fail to do that in the given time frame, the deal will be auto-cancelled and the Bitcoin will be returned to the seller’s wallet. 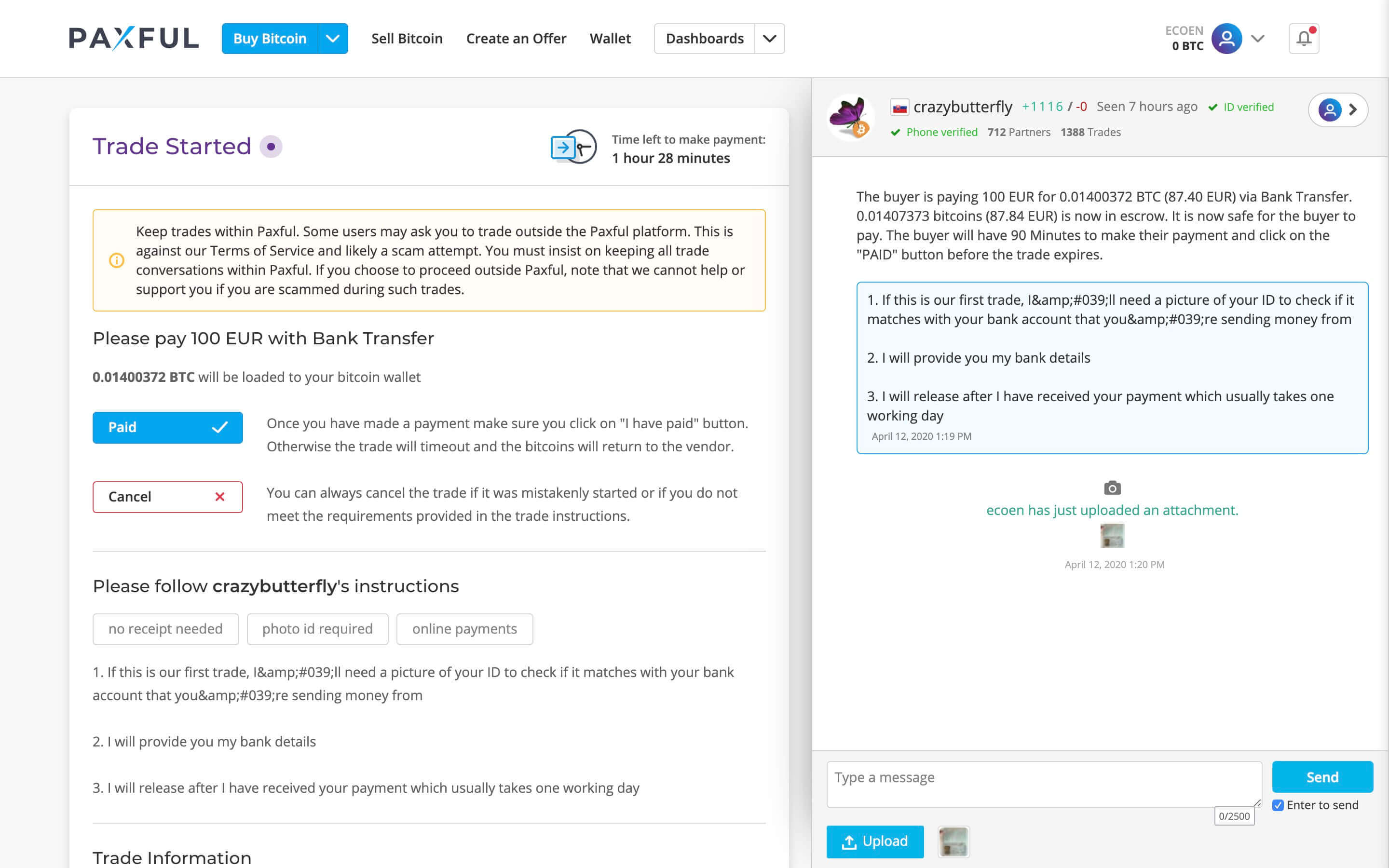 When both the buyer and the seller have verified that the transaction has been confirmed and all the terms have been met, the money will be released to the buyer’s wallet and the deal will be concluded. If at any point there will be a disagreement between the two parties, the process will move along to dispute. Paxful moderators will then investigate all the info, consider all the available details and finally make a decision to whom the bitcoins will be awarded. Having said that, in most cases transactions go through smoothly thanks to Paxful’s intense moderation that clamps down on potential scammers.

Paxful deals with the buying and selling of Bitcoin only. Since the money is sent directly to the sellers, the site itself doesn’t hold fiat currencies for users. Sellers on Paxful accept over 300 payment methods, with the most the most popular ones being credit cards, PayPal, Amazon gift cards, wire transfers and Western Union. Keep in mind that different payment methods will result in different exchange rates.

If you’re buying Bitcoins on Paxful, you won’t have to pay any fee to the site itself. Different sellers, however, may charge fees or a premium, depending on your payment method as stated before. Sellers on Paxful pay a 1% fee to the company. Additionally, there are normal Bitcoin network fees which are paid by the sender, in order to transfer money through the network. These fees do not go to Paxful but to Bitcoin miners.

If you withdraw the bitcoins that you bought from your Paxful wallet to an external bitcoin wallet, you'll also have to pay a network fee to bitcoin miners. These fees are denominated in bitcoin. For amounts above $20 the fee is fixed at 0.0005 BTC.

How to use Paxful safely

Like on every marketplace it's important to proceed with caution when buying from strangers. Paxful itself is a very trusworthy Platform itself but there's no guarantee all sellers on its platforms are. Here are a few tips:

Paxful brings users the ability to buy Bitcoins with almost any conceivable payment method. The user experience is extremely intuitive and while everything seems pretty neat there are still some things you’ll need to look out for. First, make sure you’re getting a decent exchange rate. Depending on your payment method, the exchange rate can sometimes reach 2x of the “official” price of Bitcoin that can be found on traditional exchanges. Second, make sure your seller has enough reputation and has conducted enough trades in his past to avoid getting scammed. As long as you are aware of these two points, the platform offers a solid solution for purchasing (and selling) Bitcoins.

If you want to know more about Paxful make sure to check out our podcast episode with Paxful's CEO Ray Youssef.

LocalBitcoins is a peer-to-peer bitcoin exchange. Unlike traditional cryptocurrency exchanges, which match buyers and sellers automatically, LocalBitcoins is more like eBay for crypto meaning that you buy directly from sellers.