Give LocalCoinSwap a try 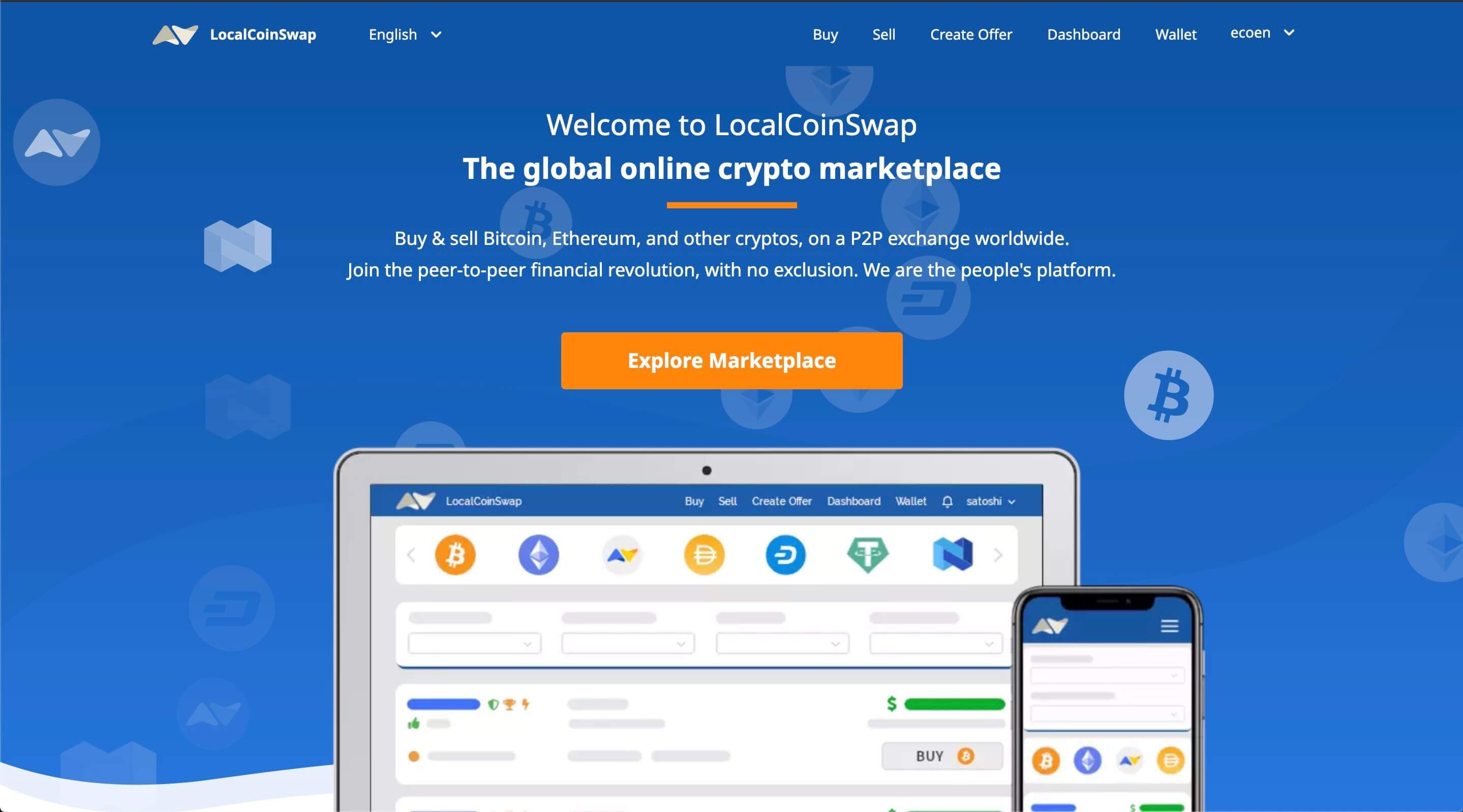 LocalCoinSwap is an online peer-to-peer marketplace that allows you to buy bitcoin and several other types of cryptocurrency, as well as sell them to traders around the world. Unlike an order book based exchange, traders interact directly with one another on a more personal level using the tools provided by LocalCoinSwap. The safety net of the escrow service and moderation team provided by LocalCoinSwap during trades helps you to trade crypto safely when using the platform.

Payment methods are never really a problem when trading on LocalCoinSwap. There is already a vast amount of choices in not just payment types but fiat currencies as well. The flexibility provided here allows you to adjust the terms of your trade offers to suit your needs, whatever they may be. Also, if a payment method isn’t currently available you can contact the team and they will look into adding it to the platform, something that can be performed quite rapidly thanks to their short support times.

Even though LocalCoinSwap is one of the newer platforms to enter the P2P trading space, they have provided a platform that is growing in both users as well as from a technical standpoint as more features are regularly added, often in response to community feedback. If you are looking for a more modern approach to P2P trading that is constantly evolving, LocalCoinSwap may be a fantastic option for you to consider. 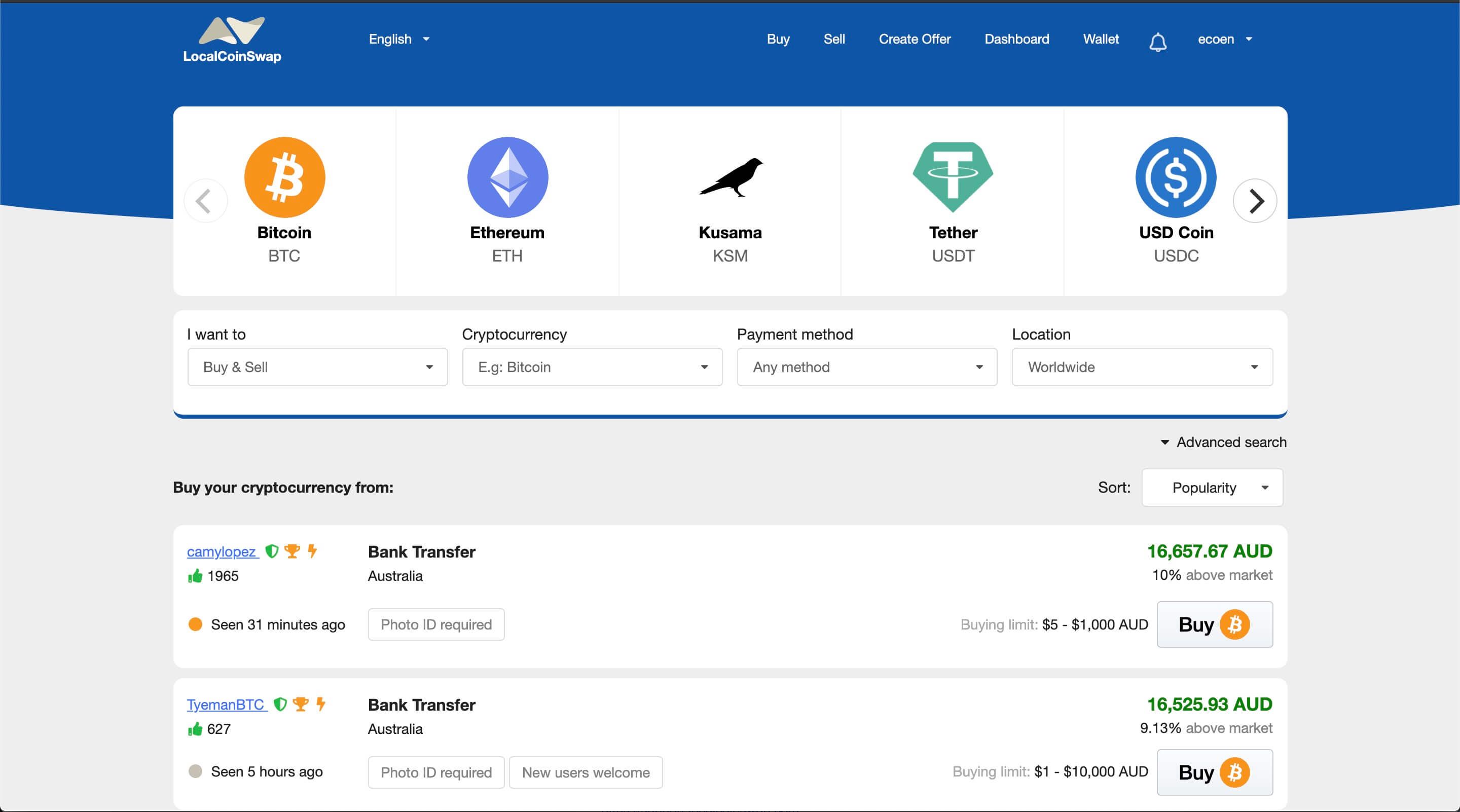 Is Trading on LocalCoinSwap Safe?

There are several features provided by the platform that helps ensure you can trade safely:

● Escrow - When trading P2P having escrow protection is vital and conducive to having a safe trading experience, LocalCoinSwap provides not just escrow but clear instructions to help newer users navigate through their first trade with the security provided by the escrow process.

● Reputation system - Each trader has a profile that provides public account history showing some useful information regarding their trading history to help you make informed decisions about who to trade with on the platform.

● 2-FA - You can choose either email as a second factor authentication (2-FA) method or use of an OTP application such as Google Authenticator and Authy. This provides a second layer of security to your account and is something that is enabled by default using email link verification.

● Support and dispute moderation - LocalCoinSwap are always happy to speak with you to help resolve an issue you may be experiencing or to moderate a disputed trade, you can also reach the team across different platforms as they regularly actively engage with the community.

LocalCoinSwap offers not only bitcoin and ether for trading, but also provides access to several other cryptocurrencies which is not common for peer-to-peer exchanges. Paxful only recently added USDT in addition to bitcoin and HodlHodl only offers bitcoin. The only peer-to-peer marketplace that comes close to LocalCoinSwap in number of supported currencies is LocalCryptos.

LocalCoinSwap is open to adjusting the listings on the platform based on the changing demands of the marketplace and P2P traders and that's something we really appreciate.

On the cryptocurrency side LocalCoinSwap supports:

While we like the number of stablecoins supported by LocalCoinSwap, some other asset choices like Nexo or Kusama seem a bit odd. These tokens have only very limited utility and demand in the crypto ecosystem.

On the payment method side, LocalCoinSwap supports a very wide range of options. As the platform only connects buyers and sellers, and doesn’t accept payment for crypto itself it is on the seller to decide how they want to be paid. The seller has the flexibility to decide not just on what payment method to accept, but also which fiat currency they wish to trade in, as well as the ability to customize the terms of their trades. Some popular payment methods used on the site include:

If you respond to a trade offer on LocalCoinSwap you won’t pay any fees, this helps encourage traders to look for suitable offers. However, if you choose to make your own trade offer the fee is a reasonable amount of 1% that is only charged for a completed trade.

If you use their non-custodial trading you are likely to experience some extra costs, though these are minor and not taken directly by the platform itself but instead as used to pay for on-chain transactions that are part of the trading process for non-custodial trades. For example during an ether trade, you will require some extra ether to pay Ethereum transaction fees to miners. The amount required fluctuates based on the demand of the Ethereum blockchain itself and isn’t an arbitrary amount set by the platform. The upside when choosing non-custodial trading is that you remain in full control over your funds as they only leave your wallet once the trade is settled.

You can also opt to trade directly with your Metamask​ wallet, reducing some transaction fees that you would otherwise have to pay when sending funds to your LocalCoinSwap account when engaging in ether or token trades. This option is not available for bitcoin however, as bitcoin is not supported by Metamask. For a more detailed overview of the fee structure, you can visit this page​.

LocalCoinSwap can have you signed up and trading in just a few moments. The process is fast and doesn’t impose excessive restrictions or verification on you just to sign up. If you have notable trading history on other P2P exchanges you can contact them and have the volume accounted for on your profile, showing other traders you may be new but are still an experienced trader.

Once you have signed up, you simply need to verify your email address to start trading. You can opt to do more verification such as verifying your phone number if you so choose, though this isn’t forced. There are no deposit limits or other significant roadblocks that get in your way when you first sign up to the platform. Indeed, LocalCoinSwap is one of the few platforms where you can buy bitcoin without ID. You only have to find a seller that is willing to sell to unverified users and there are quite a few who seem to do it based on our experience.

If you are new to trading P2P or trading cryptocurrency in general, the best way to get started using LocalCoinSwap is to find an experienced trader to help make your first trade a great one. On LocalCoinSwap you can visit the profiles of users and check their recent feedback, see when they were last active, as well as see other useful information such as the number of completed trades they have performed.

Use the search feature to filter for suitable trades based on location, payment methods, and other factors that may be important to you. Once you have found a suitable match you can then enter the amount of cryptocurrency you would like to trade in either a fiat value or in the value of the crypto being traded. Once you initiate the trade a trade request will be sent to the other party, if they accept you will receive a notification and can begin your trade. 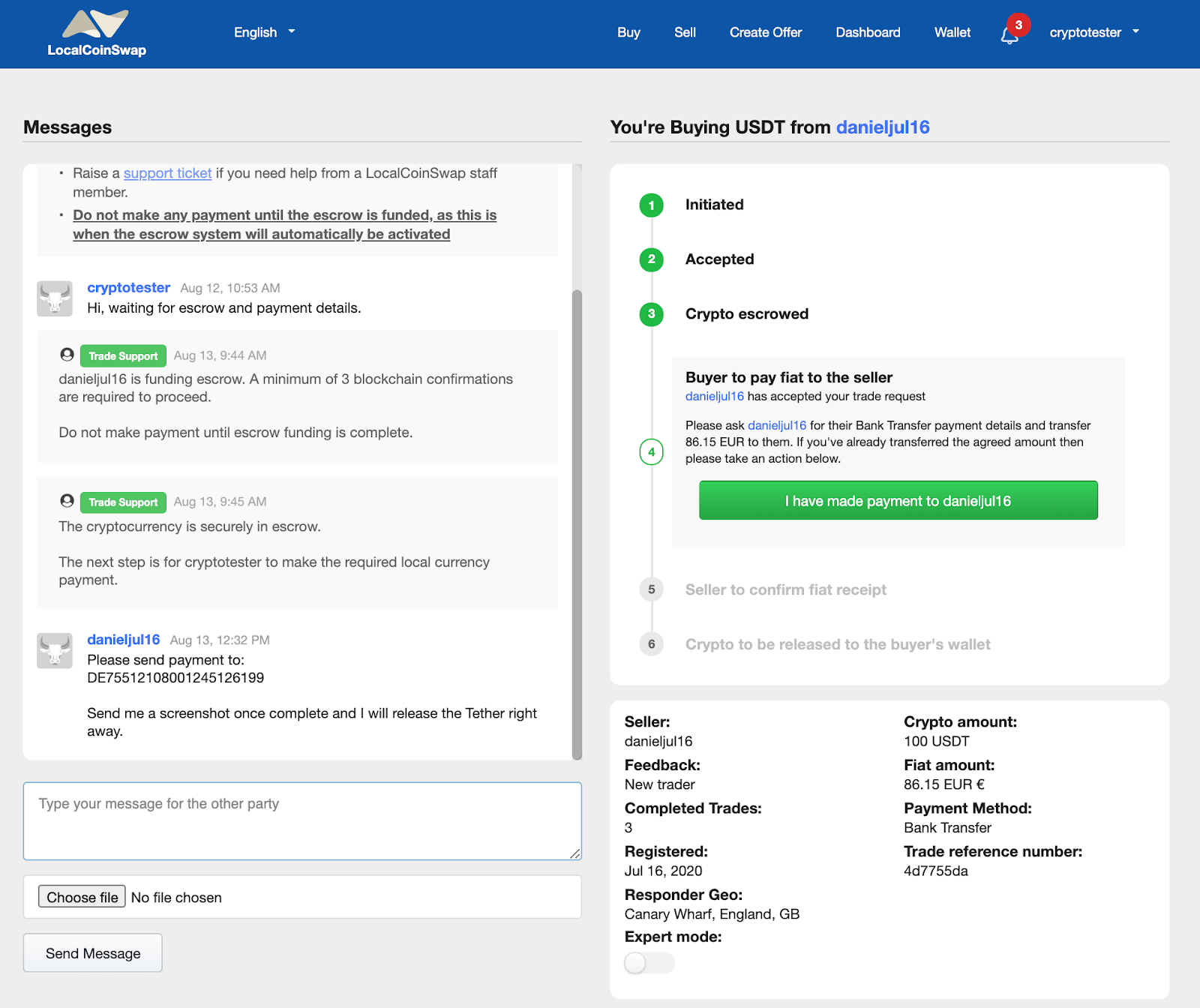 The trading process is intended to be quite clear and you can follow along with the steps provided during the trading process to make sure you are doing the right thing at the right time. The most important thing to remember is to never send payment before the escrow is marked as funded or to release escrow before payment has been confirmed as received. 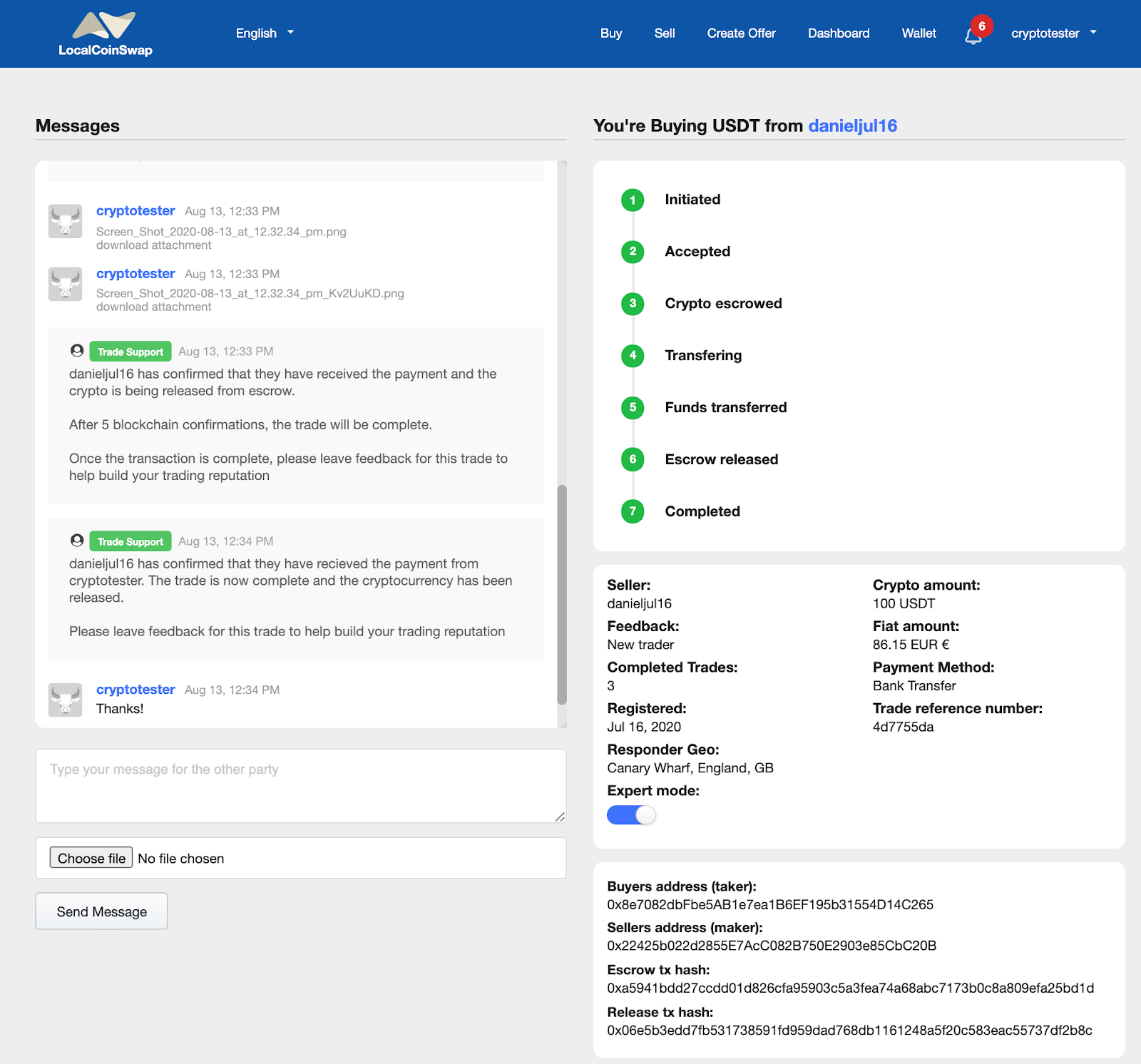 LocalCoinSwap brings together traders from all over the world and allows them to trade with minimal restrictions. The user experience is great with the team working to provide a modern platform that is both practical and intuitive. Work on the project has been consistent since it’s launch which shows a commitment to providing the best trading experience for their users.

The most important thing to remember is while LocalCoinSwap is legit, you may come across traders that are less than trustworthy, this is common to all P2P exchanges and once reported the exchange will take swift action against accounts that are trying to scam users. The escrow process provides a great deal of protection when used correctly, you can mitigate most risks merely by paying close attention to the stage of the trade you are up to and reporting any requests for you to break out of the recommended trading flow or to trade off-platform.

If you are looking for an alternative to older peer-to-peer exchanges and are interested in trying something new that is attracting more traders by the day, check out LocalCoinSwap and see if it’s right for you.

Read our Paxful review to know about the key features, security, customer support offered by this exchange before buying bitcoin on Paxful. Paxful is great for..

LocalBitcoins is a peer-to-peer bitcoin exchange. Unlike traditional cryptocurrency exchanges, which match buyers and sellers automatically, LocalBitcoins is more like eBay for crypto meaning that you buy directly from sellers.