What is $MEME protocol and how do I get MEME NFTs?

In today’s tutorial we’re going to show how to farm MEME NFTs using the $MEME token and explain what the project is about.

Let’s start with how it began. $MEME started with a satirical [tweet] (https://twitter.com/JordanLyall/status/1294466755692081152) by Jordan Lyall, a developer at Consensys in which he mocked the rapid emergence of “food coins”. In the tweet he linked to a graphical mockup on Notion, which outlined the idea of a project called “The Degenerator”, a website that would allow people to spin up a new DeFi project in minutes - drag and drop style. 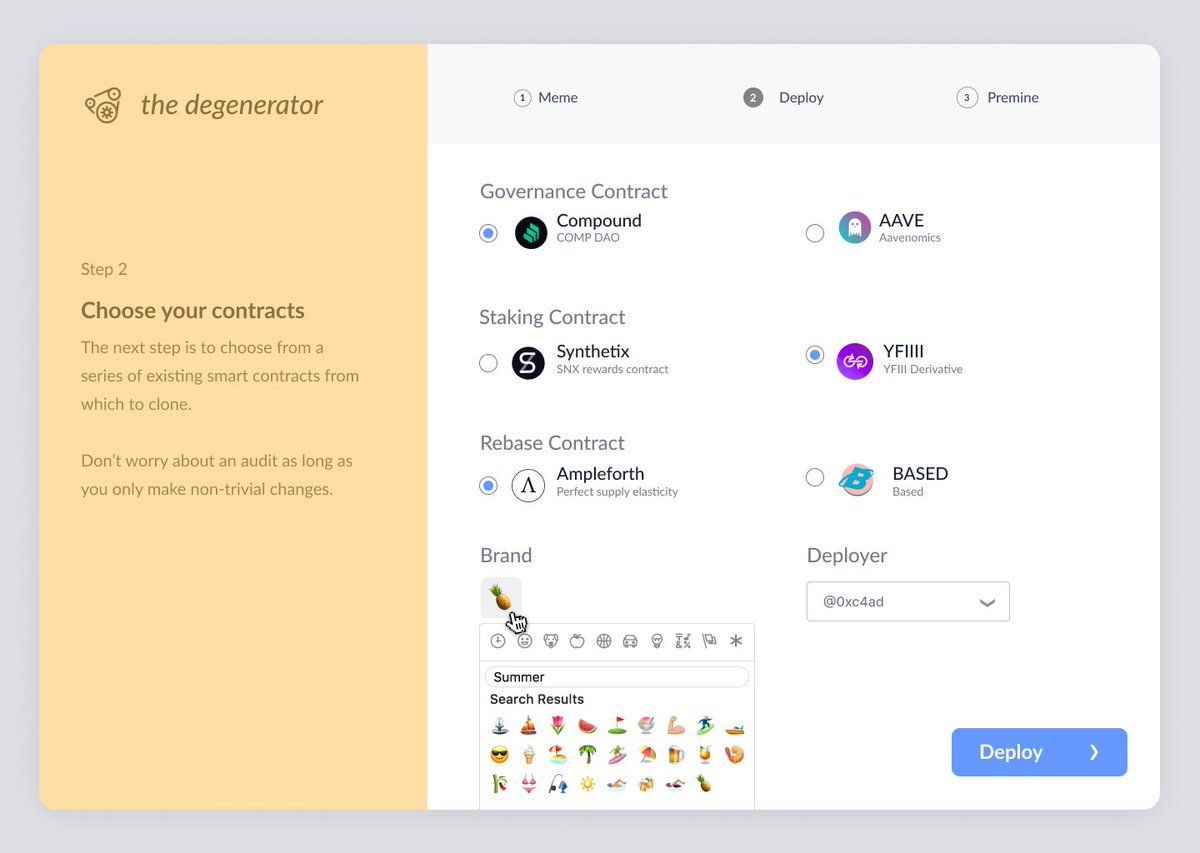 In the tweet thread he gave the imaginary project token a name: $MEME. Little did he know that hours after his tweet, someone (anonymous) would create the $MEME token for real. Because this is crypto and things always get crazy the token’s trading volume reached $1.2m on that very same day and a price of $40 dollar per token.

What is $MEME today?

Since then the project has taken a life of its own. Thrilled by the hype and the $MEME ($MEME’s logo is a pineapple), a community rallied in the project’s Telegram channel and several people expressed interest to develop the imaginary project into a real product.

However, against all odds the project turned into something completely different than what was pictured on the mockup. Instead, it turned out into an experiment with DeFi and art.

In short, MEME is a decentralized protocol for farming NFTs. Let’s unpack this sentence.

Farming refers to the act of staking tokens in new DeFi protocols to earn the platform’s native governance token. DeFi projects use it to attract and incentivise early adopters.

Non-fungible tokens (NFT’s) are cryptographic tokens that represent something unique. Fungible tokens like Ether (ETH) for example are not unique. Each unit of Ether is equivalent to the next whereas each NFT is verifiably unique. NFT’s are used in several applications that require digital scarcity and digital ownership, like crypto art, crypto collectibles and gaming. First popularized by CryptoKitties, NFT’s are seeing a renaissance lately and MEME is capitalizing on that!

With MEME, instead of farming for yield like most DeFi projects, users stake assets to earn limited edition NFTs from some of the top artists in the Ethereum space. Each user can stake a maximum of 5 $MEME tokens. In return, they receive points (expressed in Pineapples) which they can redeem against the NFT’s available on the platform.

As you might imagine, not all NFT’s are equal. There are different categories like “Relic”, “Common”, “Rare”, which determine how many pineapple points the NFT costs. If you want a “Rare” NFT for instance you need to stake your $MEME for 30 days provided you’re staking the maximum of 5 $MEME tokens. A “Relic” NFT on the other hand, can be obtained in less than a day.

The fourth, ultra-rare “Legendary” category can only be farmed if you provide liquidity on the $MEME/ETH trading pair on Uniswap and stake the Uniswap LP tokens. This farming pool is called Genesis LP, whereas the standard staking is called Genesis.

This mechanism creates scarcity and hype around certain NFTs. The interesting thing is that because these NFTs are Ethereum tokens they can be immediately traded on the secondary market. One person famously sold the “Legendary” Sergey Nazarov card for 77ETH on the NFT marketplace OpenSea for example after farming it and donated it to the MEME project’s treasury.

The interesting thing about $MEME is that all the supply of 28,000 $MEMEs has been airdropped to early adopters. There are no new $MEMEs being created. This effectively means that the means of production of NFTs are purely in the hands of $MEME tokens holders. Only token holders can get their hands on freshly minted NFTs. All others have to purchase them on the secondary market. To compare this to the real world, it would be as if there was a gold mine but only 28,000 picks in the entire world to mine the gold. Naturally, these picks would become quite valuable.

How do I farm NFTs with $MEME?

Here’s a quick guide on how to farm NFTs with $MEME.

The first step is to get your hands on $MEME tokens if you don’t have any. Go to DontBuyMeme.com and click on “Don’t Buy”. This will bring you to Uniswap, with the $MEME token pre-loaded in the Uniswap interface. You can also go to Uniswap yourself but you’ll have to paste the token address yourself because Uniswap doesn’t list relatively new tokens to protect users. You can grab the token address from Etherscan or [Coingecko] (https://www.coingecko.com/en/coins/meme).

2) Decide which NFT farm you want to join

Back on DontBuyMeme.com with your newly acquired $MEME tokens you have to decide which of the two farms you want to join. The easy and pretty much risk free way is to join the Genesis farm and stake 5 $MEME. Alternatively, you can add liquidity on Uniswap to the $MEME/ETH pair by adding both ETH and MEME tokens. Bear in mind that this is quite risky though and can result in impermanent lossif $MEME price drops sharply for example.

Assuming you chose the standard Genesis pool, you’ll have to stake your $MEME tokens in order to get pineapple points. To do so, click on “Manage stake”. A dropdown will open displaying a button “Approve Meme”. This is a standard procedure when interacting with a dapp and is required to allow the dapp to move the $MEME tokens on your behalf (up to a ceiling). After the “Approve” transaction is confirmed on the Blockchain you have to do a second transaction to “Stake” your tokens.

Within a couple of minutes you’ll see your pineapple points accruing. Once you have enough pineapple points you can navigate to the NFT you want and click on “Redeem”. This will again open your Ethereum wallet and require you to confirm a transaction. After the transaction is confirmed you can go to the “My cards” section and see your NFT. If you use a wallet like Argent you can also see your NFT within your wallet. If you want to sell your NFT you can go do that on OpenSea.

MEME protocol is an interesting project at the intersection of DeFi and art. It’s still very early but the potential for NFT’s is enormous and we’re excited to see how this protocol will develop.

What do you think about $MEME? Tag us on Twitter @cryptotesters or join our Telegram to discuss!