Aave is a decentralized lending market built on Ethereum. Learn everything there is to know about Aaave, Aave price, market cap and other relvant metrics, how the protocol works, how it’s governed and where to buy Aave.

Aave is a Decentralized Finance (DeFi) protocol that enables users to lend and borrow a diverse range of cryptocurrencies. It works similar to a bank in that it manages loans and interest accounts on behalf of users. However, unlike a bank Aave is powered by smart contracts on the Ethereum Blockchain that automate the daily operations (interest rates, loan payouts etc.), governance and the development of the Aave protocol.

In a nutshell, lenders who want to earn interest, supply their assets to the Aave protocol and borrowers can borrow from that pool of assets given they provide sufficient collateral to secure their loan. Naturally, borrowers have to pay interest, which accrues as long as the loan is open. The interest rate borrowers pay as they payback their loan goes to compensate the lenders and a small part goes to the protocol. 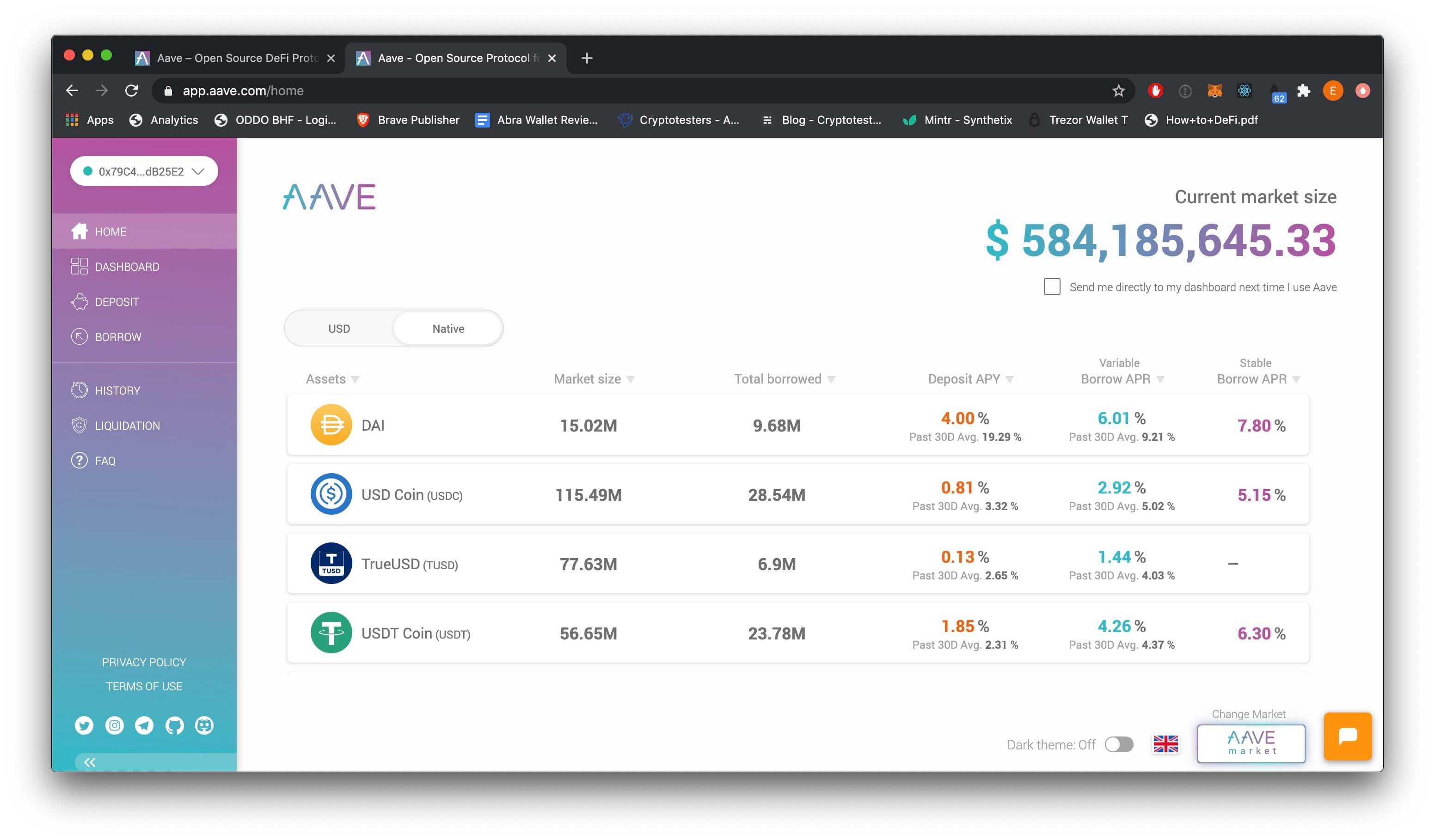 Unlike many banks in the real world which give out unsecured loans when they think there is a high likelihood customers will payback their loan, most AAVE loans are fully collateralized. All borrowers must deposit sufficient assets to get a loan. Moreover, to prevent loans from going bad, the Aave protocol determines “liquidation thresholds”. When the value of the deposited collateral falls under a specific threshold, liquidators (independent for-profit actors) can step in, seize the collateral and sell it on the market.

Interest rates are determined algorithmically based on supply and demand. The underlying interest rate models on the other hand are determined by the community of $AAVE token holders in a decentralized governance process.

Apart from the liquidity, network effects and partnerships it has, there are a few things that set Aave apart from other DeFi lending protocols.

First, it offers borrowers the choice between stable and variable interest rates when borrowing, whereas most lending protocols only offer variable borrowing rates. Stable rates are more predictable and less risky and therefore quite popular with many traders.

Aave supports so-called “flash loans”. These are not targeted towards retail customers but more for developers and sophisticated traders who are chasing profit opportunities in the DeFi space. Flash loans allow a borrower to borrow an arbitrary amount of funds as long as the loan can be paid back in the same transaction.

Credit delegation allows depositors to supply assets to Aave just like they normally would; however, instead of borrowing against their deposits themselves, they can delegate their credit line to a third person. This enables the third person to borrow from Aave without posting collateral. The uncollateralized loan agreement is negotiated between the delegator and the borrower and is governed by OpenLaw legal agreements, which secure the enforceability of the agreement.

AAVE’s primary function is to govern the protocol. All token holders can submit and vote on Aave improvement proposals (AIP’s), which have the purpose to improve the protocol. This includes market policies (supported assets, LTV’s, interest rate models etc.) as well as protocol policies (general rules, allocation of “marketing” funds etc.). Token holders who don’t want to actively participate in the governance can choose to delegate their vote to protocol politicians.

Token holders can also stake their $AAVE tokens in Aave’s insurance fund - which acts as protection in case of loan defaults. By staking and securing the protocol users are eligible to receive security incentives (SI) and a percentage of protocol fees.

To incentivize network growth, users can also earn $AAVE tokens by lending or borrowing assets. Rewards are financed by the Aave Ecosystem Reserve which acts as a sort of protocol treasury and holds 3 million AAVE tokens that can be allocated to protocol incentives as governance sees fit.

Where to buy Aave?

Like every protocol, Aave can be used through various interfaces such as Argent and DeFi Saver for example, as the smart contracts are open for anyone to use. However, the main interface which is maintained by the Aave core team and has most features is accessible on aave.com. 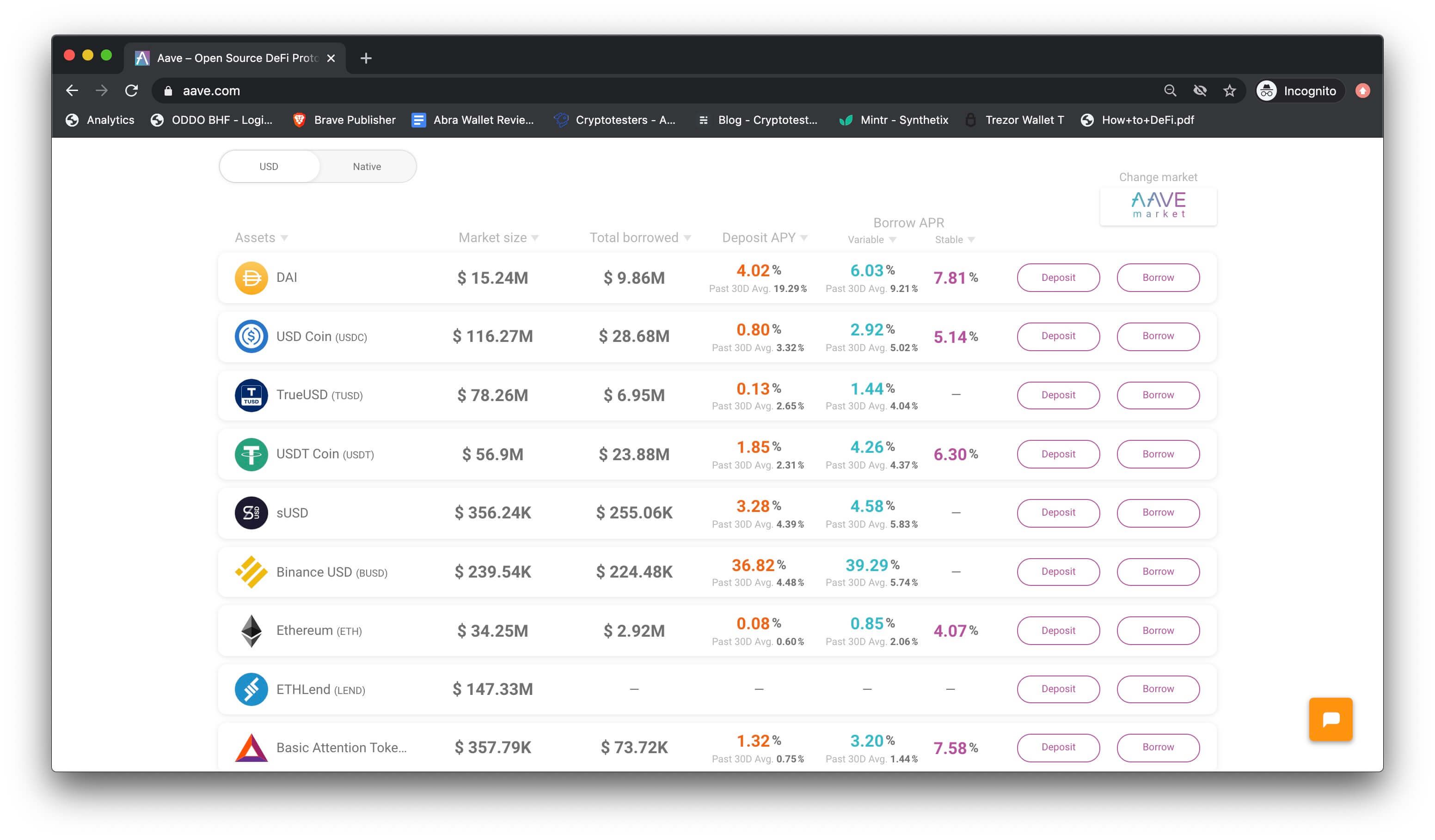 To get started, click on the asset you want to lend or borrow. This will lead you to the Aave app (app.aave.com) where you will be asked to connect your Ethereum wallet. You can use any Ethereum wallet that is Web3 compatible such as Metamask & Fortmatic. If you have a mobile wallet such as Argent or Coinbase Wallet you can connect it by using the option “Wallet connect”. 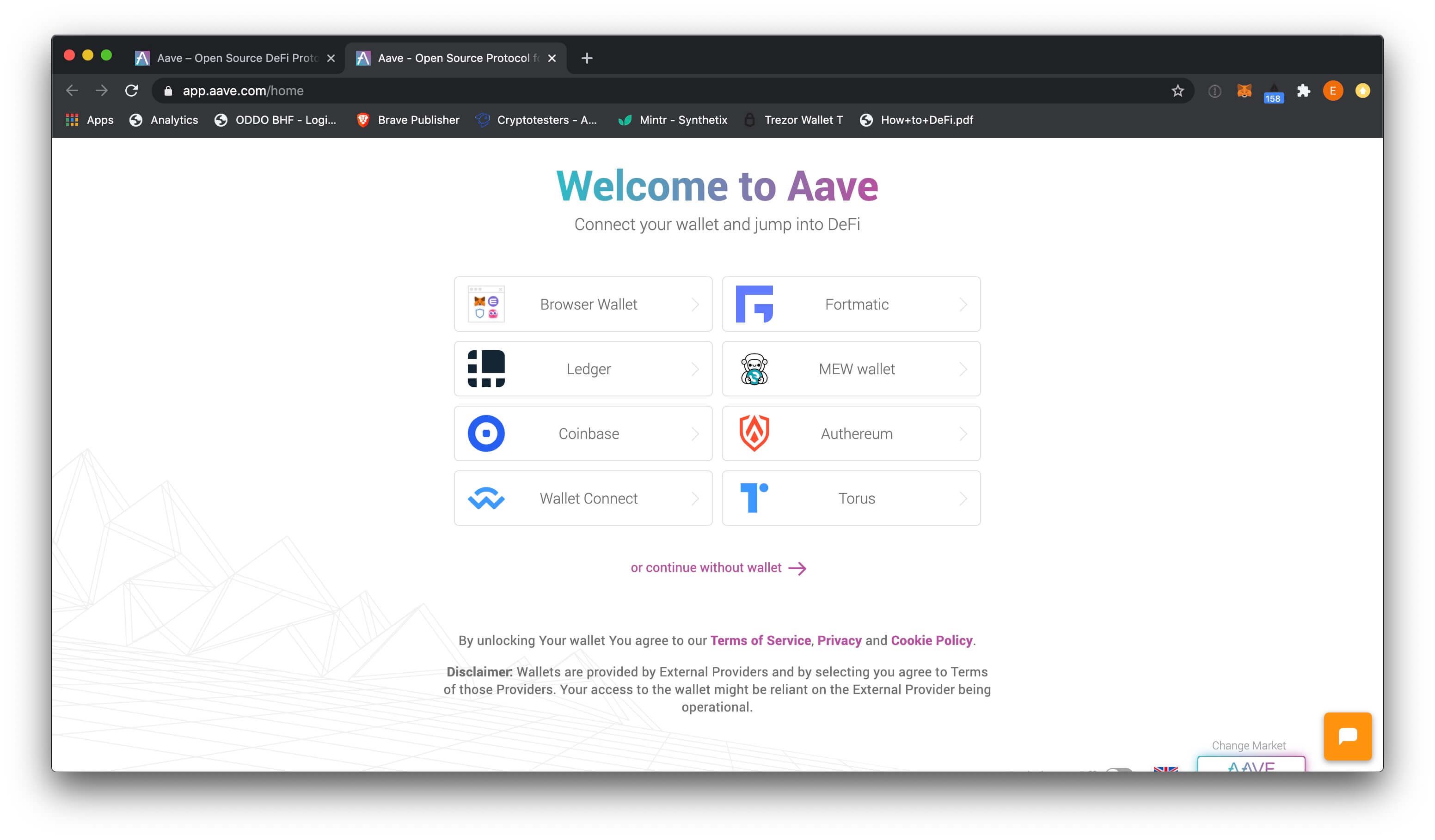 Once you have connected your wallet (we used Metamask ) you will land in the Aave app and you’re ready to start lending or borrowing.

How to lend on Aaave

To lend on Aave click on the “Deposit” tab on the left side of the window. The first few rows in the Deposit window, represent assets that you own and hold in your wallet and are available for lending on Aave. Further down, you will see all other assets available on Aave. 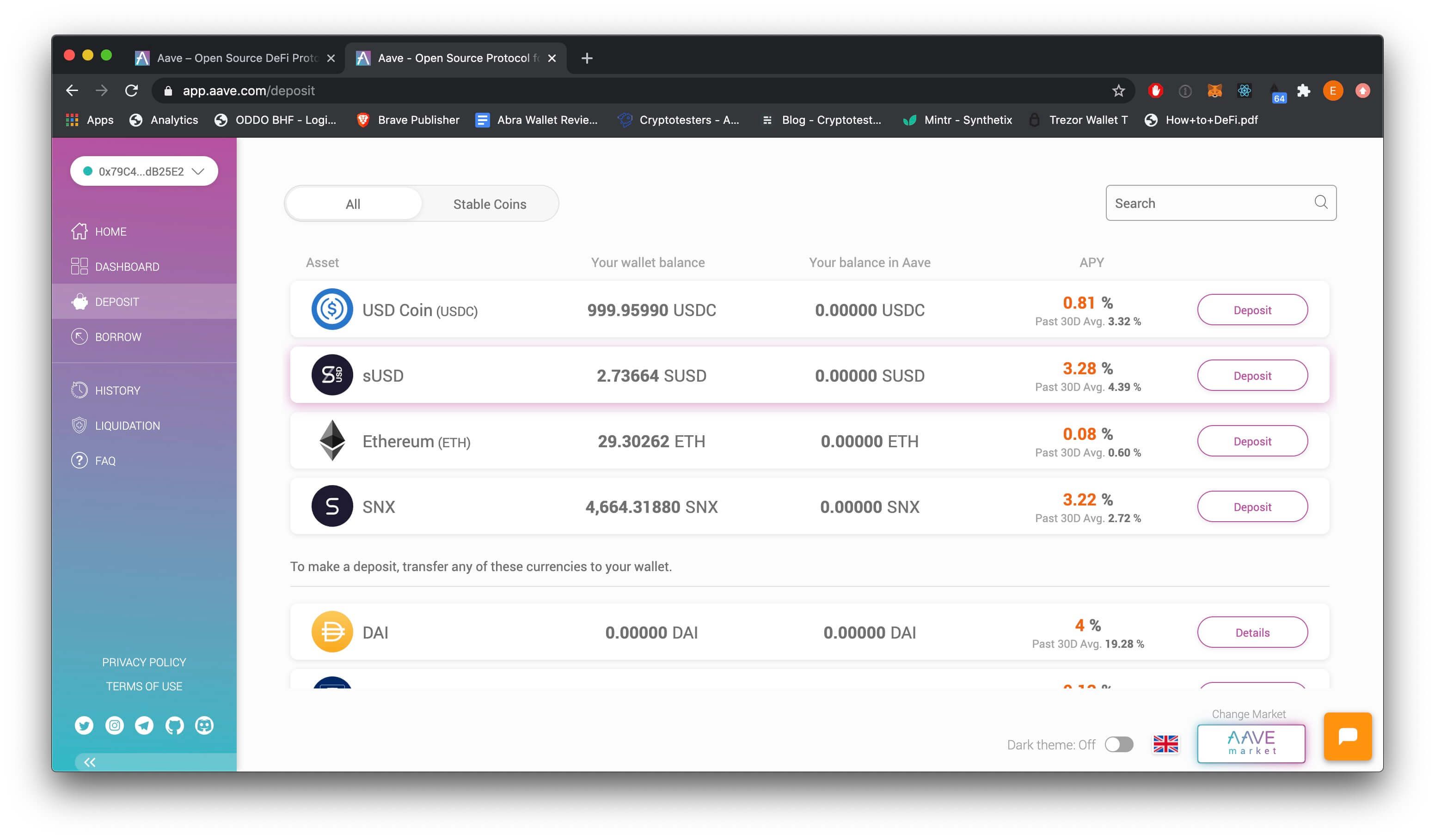 After you have chosen an asset (we chose USDC), you can set the amount that you want to deposit. On the right panel you can see useful market stats, specific to the asset that you deposit. We’ll cover them more in detail in the next section on how to borrow with Aave, as they apply more to borrowers. 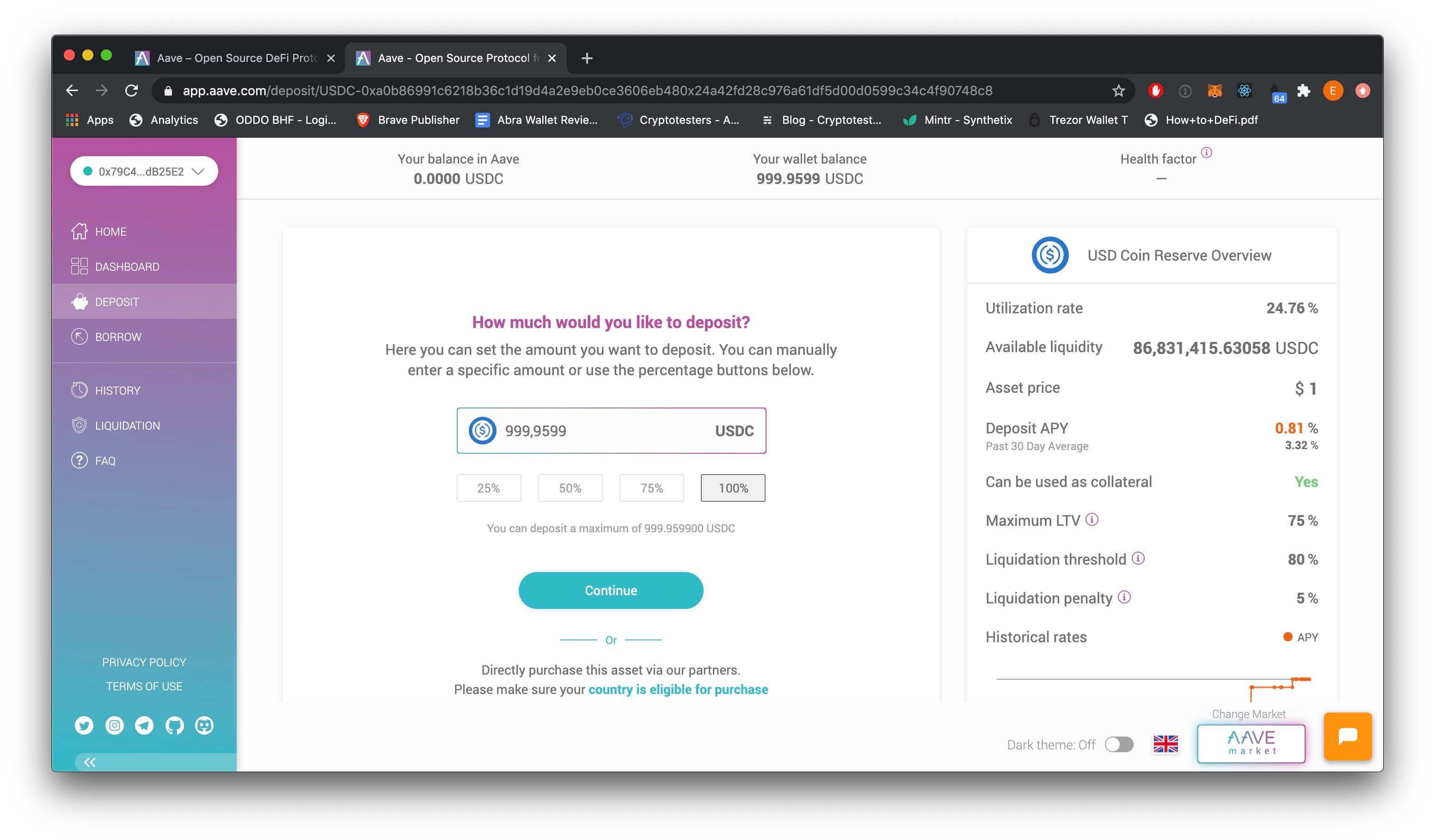 Press on “Continue” once you have decided on the amount that you want to deposit, .

Next, you’ll see a screen asking you to perform two actions. The first is to approve Aave’s smart contracts to spend a specified amount of USDC on your behalf. This is a standard procedure when interacting with Ethereum ERC-20 tokens. The second is the actual deposit transaction, where you’ll send your funds to Aave. Both actions are triggered by clicking on the “Submit” buttons, which will prompt a dialogue with your Ethereum wallet. 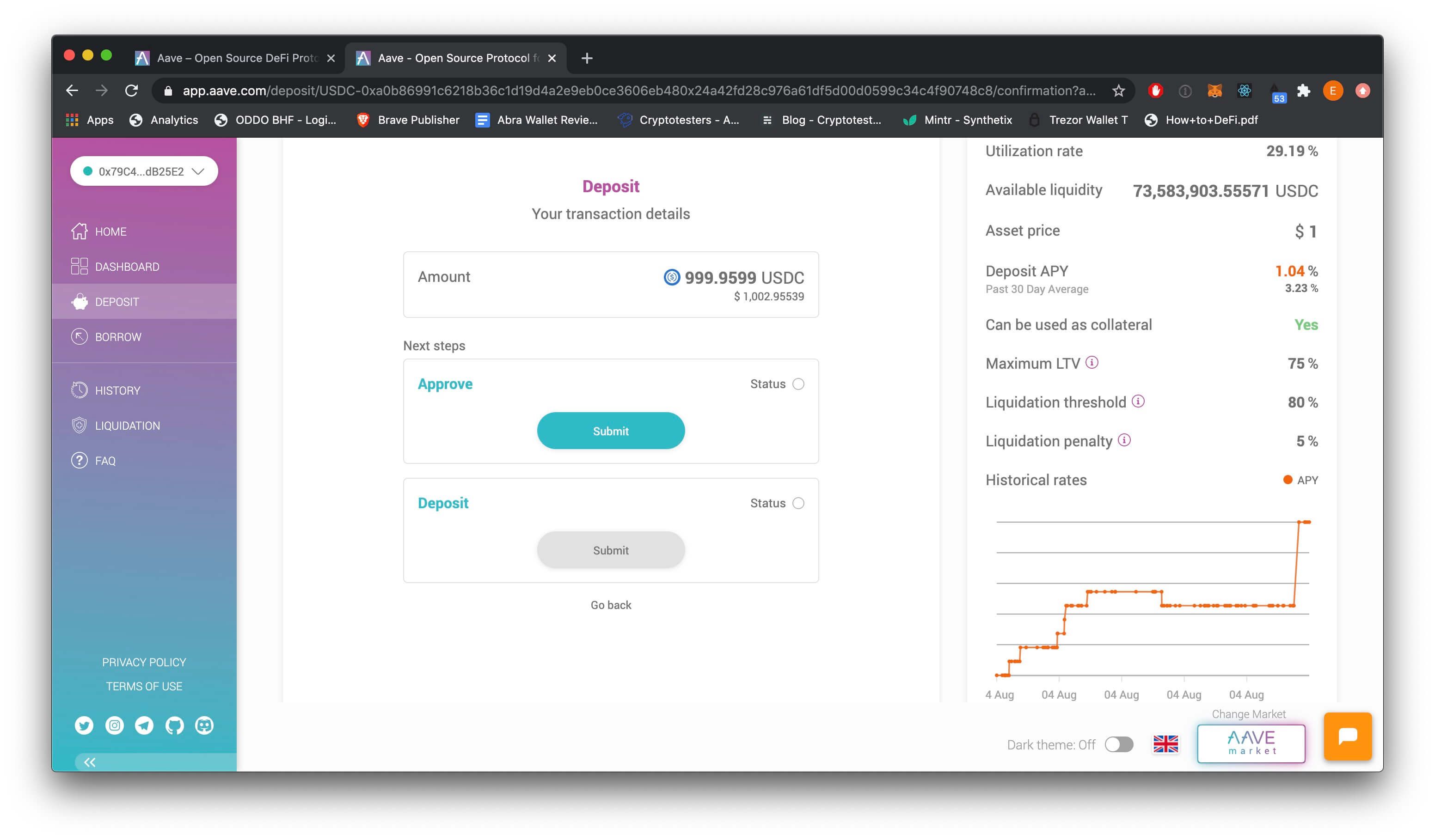 As soon as you have completed both steps and they have been confirmed by miners on the Ethereum Blockchain, you’ll see your asset accruing interest in the “Dashboard” section of the app. Enjoy! 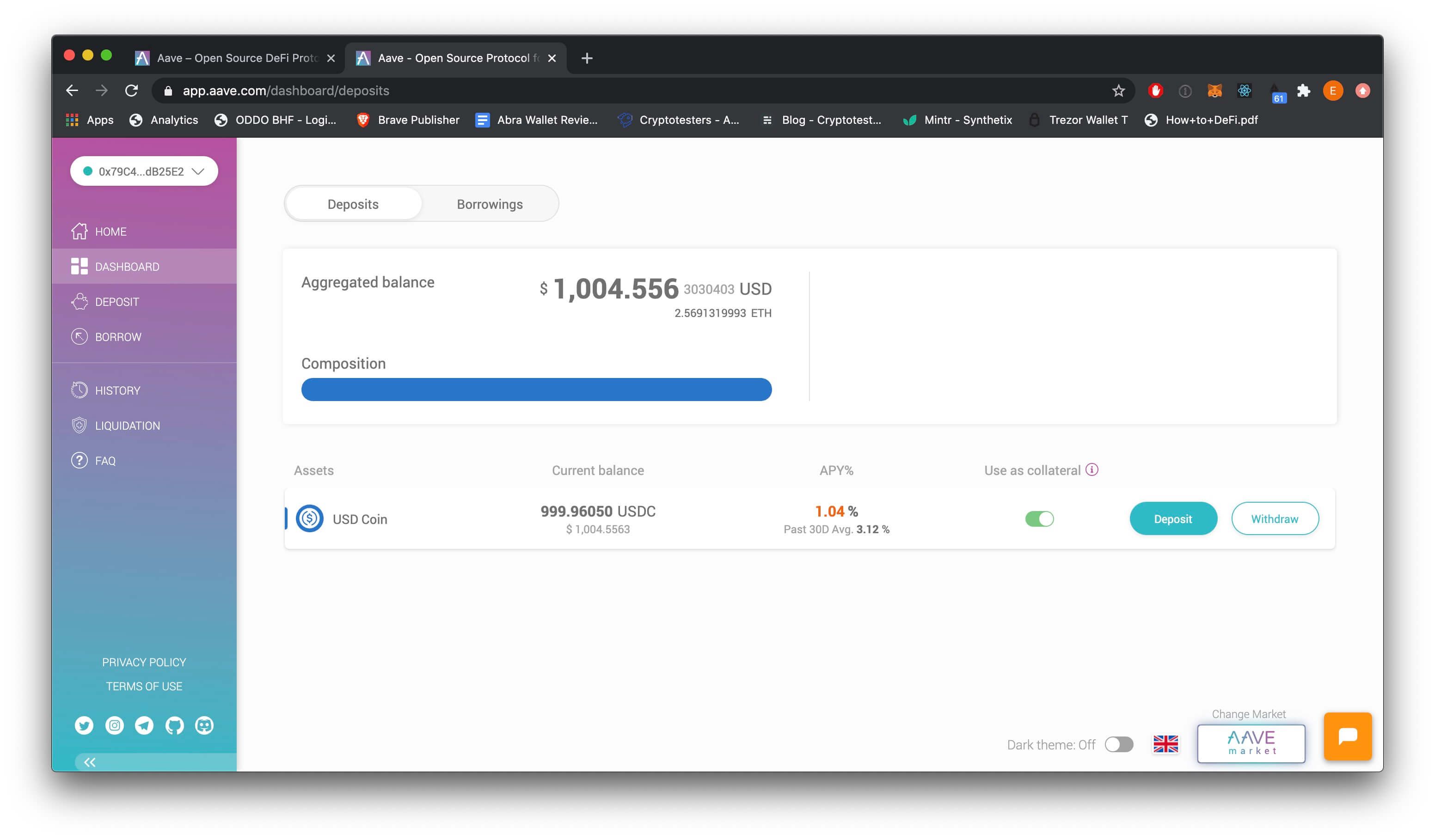 How to borrow with Aave

The borrow process on Aave is quite straightforward and similar to the lend process. First, you need to have deposited collateral in order to borrow. In our case, we deposited USDC, so we’re able to borrow any asset against our USDC collateral. 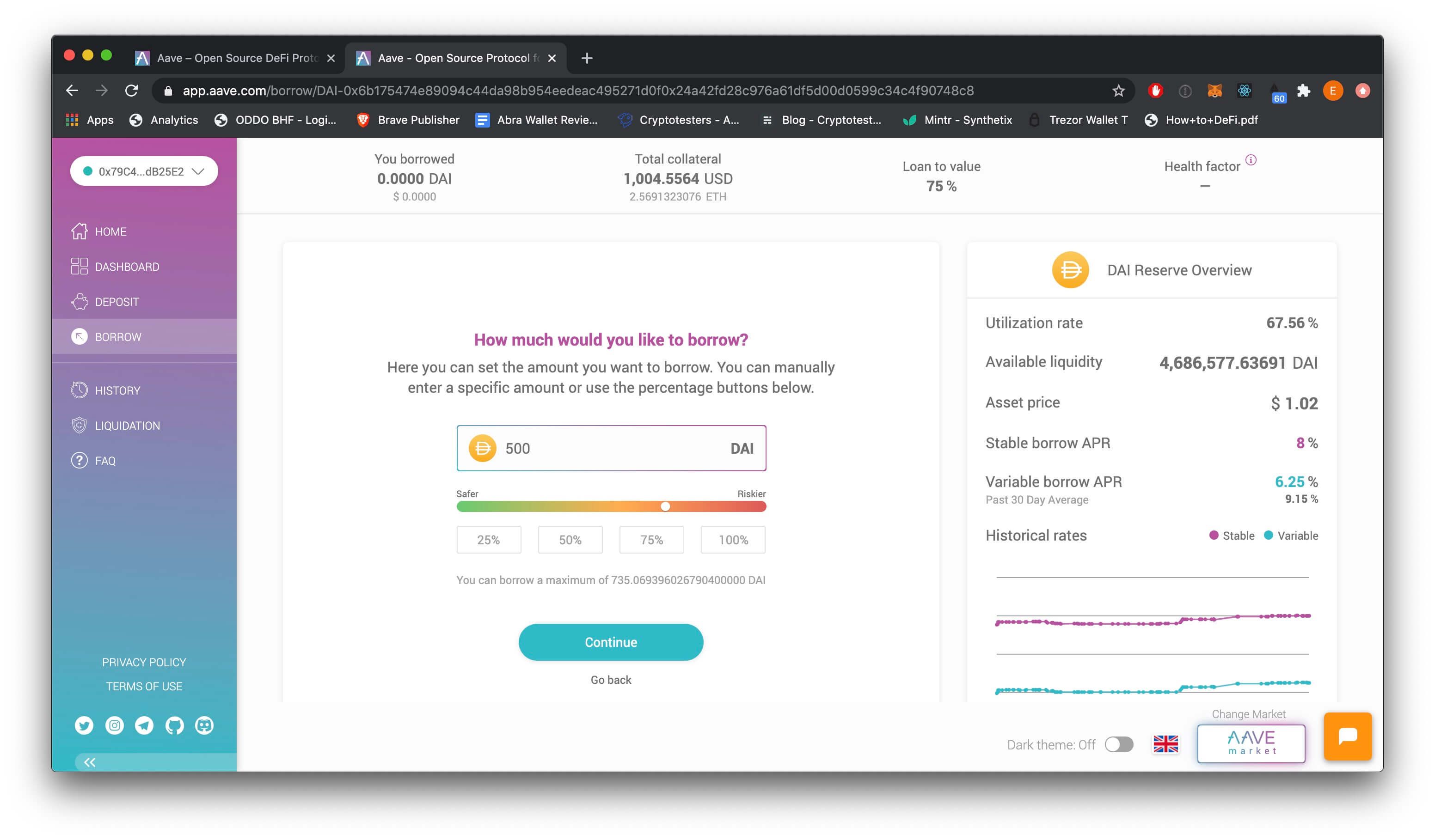 How much exactly you’re able to borrow depends on the amount of collateral you deposited and the loan-to-value of the specific asset you want to borrow.

Maximum LTV The Maximum Loan-to-Value ratio represents the maximum borrowing power of a specific collateral. In our example, we deposited 1000 USDC which has a LTV of 75% so we can borrow up to $750 of DAI.

Utilization rate The percentage of assets lent out to borrowers. If the utilization rate is high it means that the asset is in high demand. If an Aave pool is being 100% utilized there can be delays when lenders want to withdraw their assets.

One cool feature about Aave is that it lets you choose whether you want to pay a variable interest rate (which fluctuates based on supply & demand) or a stable guaranteed rate. 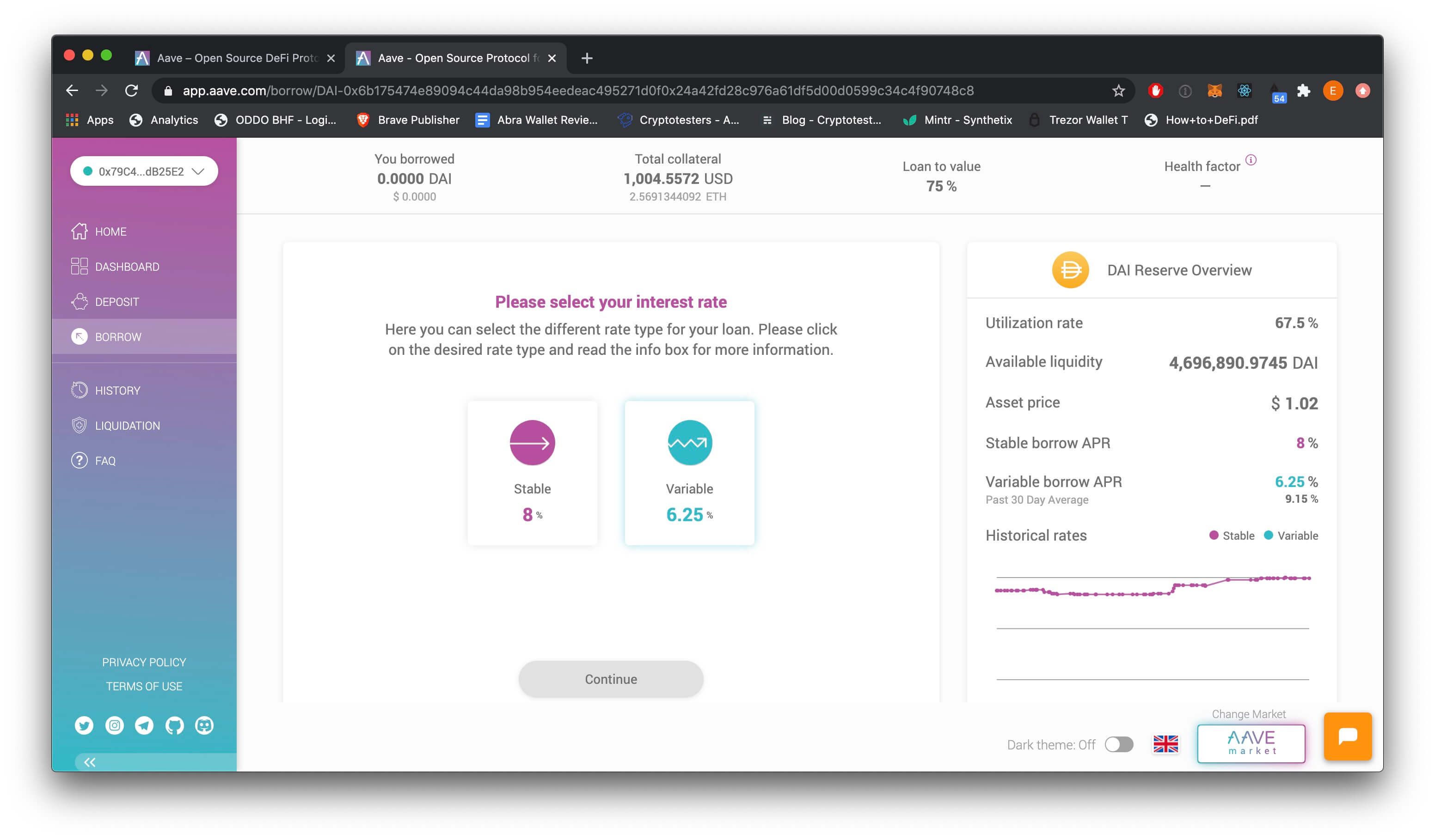 Lastly, you will see a confirmation screen summarizing all the relevant information on the loan. The health factor is a numerical representation of the riskiness of your loan. The higher it is, the better. Make sure you add funds before it reaches 1, else your collateral will be liquidated. Once this step is completed, you will have the borrowed amount in your wallet. For more information on how to use Aave refer to their FAQ. 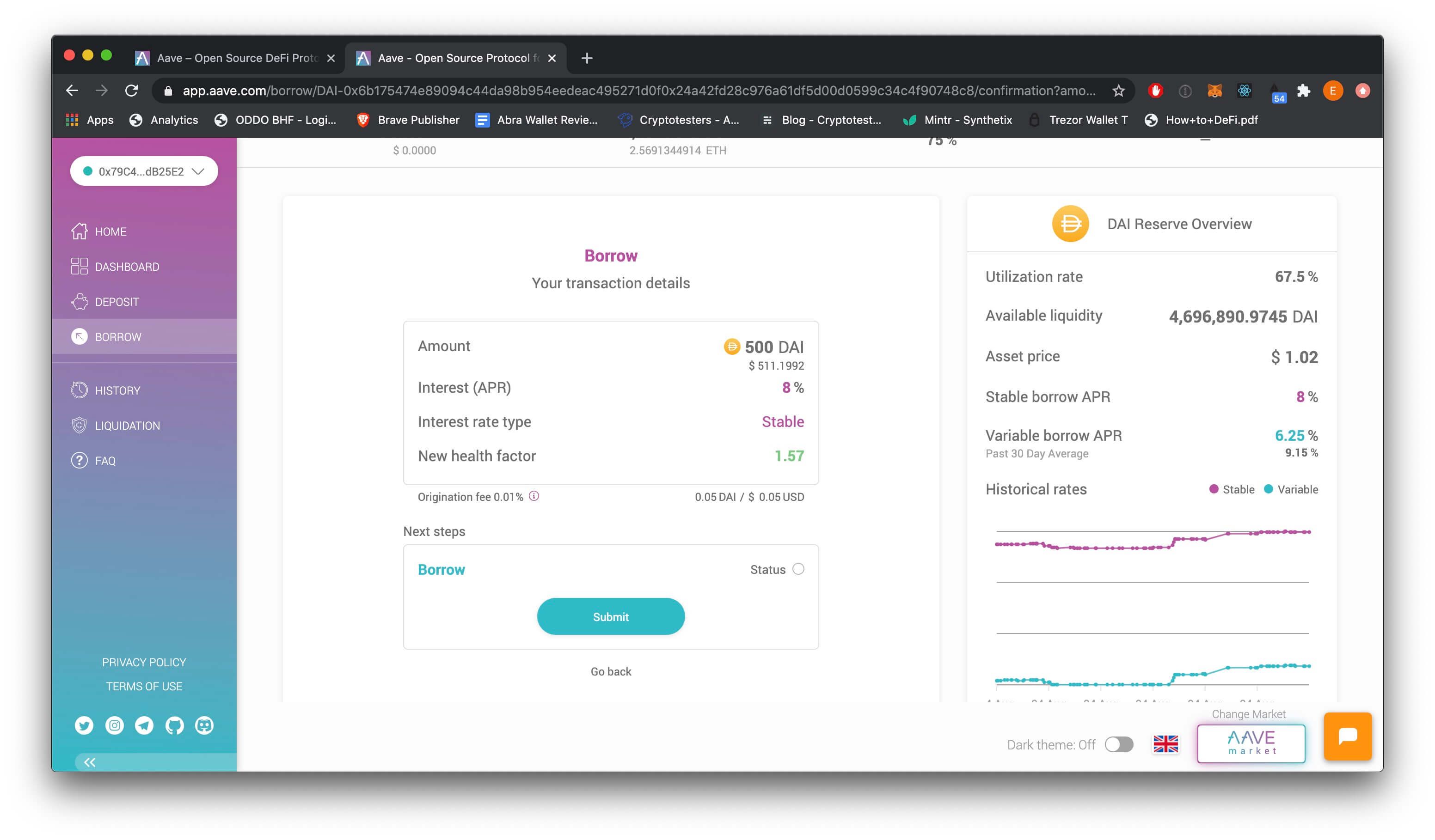 DeFi Saver let’s you open, track and manage your Aave positions. Added features such as “Automation” keep your position at a certain ratio and protect you from liquidation.

Community-run website that monitors the utilization of the Aaave protocol. Check the accrued fees, issued loans and many other useful stats in real time.

How to buy bitcoin