How does Aavegotchi work? 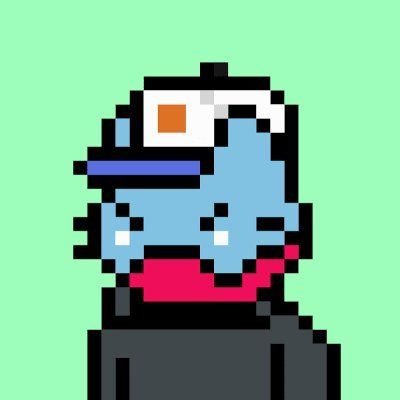 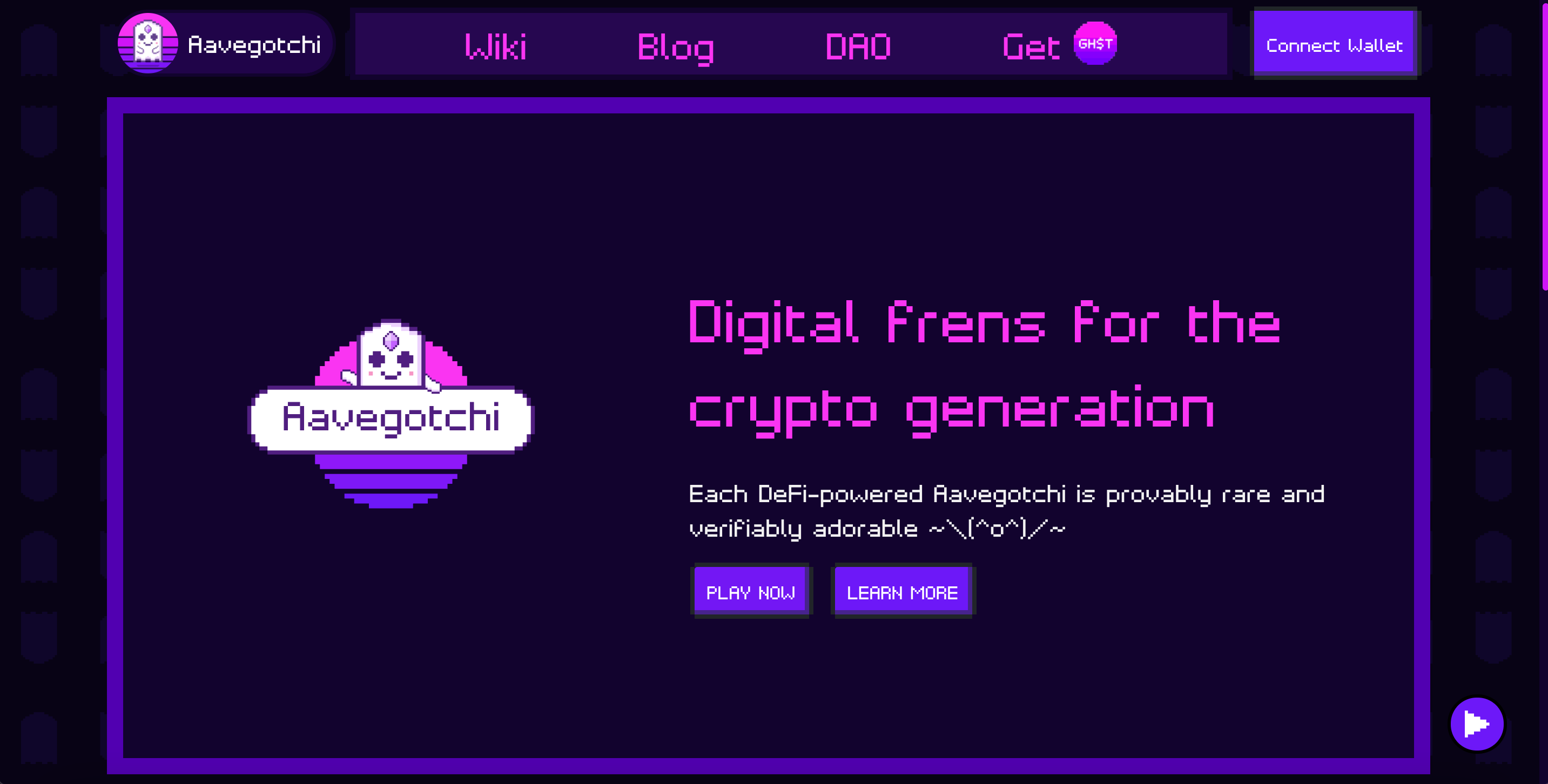 Aavegotchis are digital pet ghosts on the Polygon Network. Bridging the gap between NFTs and DeFi, they will happily help you collect income based on their rarity and other factors, but expect you to take good care of them in return. The GHST token drives the in-game economy and governance.

The launch of the "Gotchiverse" is tentatively planned for January 2022. It will provide a digital home, playground and battlefield for the gotchis and their owners,with novel game mechanics and revenue sources. So what could be a better time to take a closer look at the ecosystem? Let’s roll!

Who are the builders & what is their track record?

Aavegotchi was launched by Singapore-based Pixelcraft Studios in mid-2020, the brainchild of project leads coderdan and gldnxross. As an Aave grant recipient project, it was on the radar of early investors and had a successful private sale shortly after the official white paper was released in August 2020. With community building fully underway, the GHST token launch followed in September.

Things went ahead smoothly, with development on testnet progressing, the Aavegotchi DAO holding its inaugural vote in October and the first wearable raffles celebrating partnerships with big brands like Chainlink, OKEx and, of course, Aave. It was not until late 2020 that the project faced its first crisis – the planned Ethereum mainnet launch was cancelled due to high gas fees. It became obvious that the cost for regular gameplay use cases would not be sustainable on mainnet and the team moved to evaluate alternatives.

After some deliberation, the project pivoted to the Polygon sidechain and finally went live with a first sale of portals (needed to summon an Aavegotchi) in early March 2021. 10k portals sold out in less than a minute and the first gotchis soon entered the blockchain. For trading them, as well as portals and wearables, the in-game bazaar was rolled out. Productive partnerships with Polygon ecosystem players like QuickSwap were announced and the project made steady progress throughout 2021. With the launch of the Gotchiverse on the horizon, a second batch of 15k portals were sold in August and the first two land sales followed in November and December 2021.

Besides the 13-strong Pixelcraft team of core contributors, a key factor in the milestones reached so far has been the growing Aavegotchi community. With a strong discord as its home base, the community has expanded by forming guilds, minigame builder teams and supporting sites focused on the ecosystem.

With the AavegotchiDAO, the project has embarked on an iterative path towards decentralized governance. As part of the current “cocoon stage”, community members can make governance proposals and vote on them.

How to get in on Aavegotchi & how to earn?

There are three investable areas in the Aavegotchi space. Let’s go through them step by step.

Every new Aavegotchi is summoned through a portal. When opening a portal, 10 random gotchis are made available for you to select a favorite. You will typically choose the gotchi with the highest base rarity score, while the other 9 disappear forever. To summon the selected gotchi, you need to equip it with a spirit force collateral of Aave tokens that will allow your new friend to accrue interest over its lifespan. The higher the base rarity score, the higher the spirit force required for summoning the gotchi.

So, how do you get your hands on a gotchi in the first place? With a floor price of around 500 GHST, the pixelated spirits have become quite pricey. 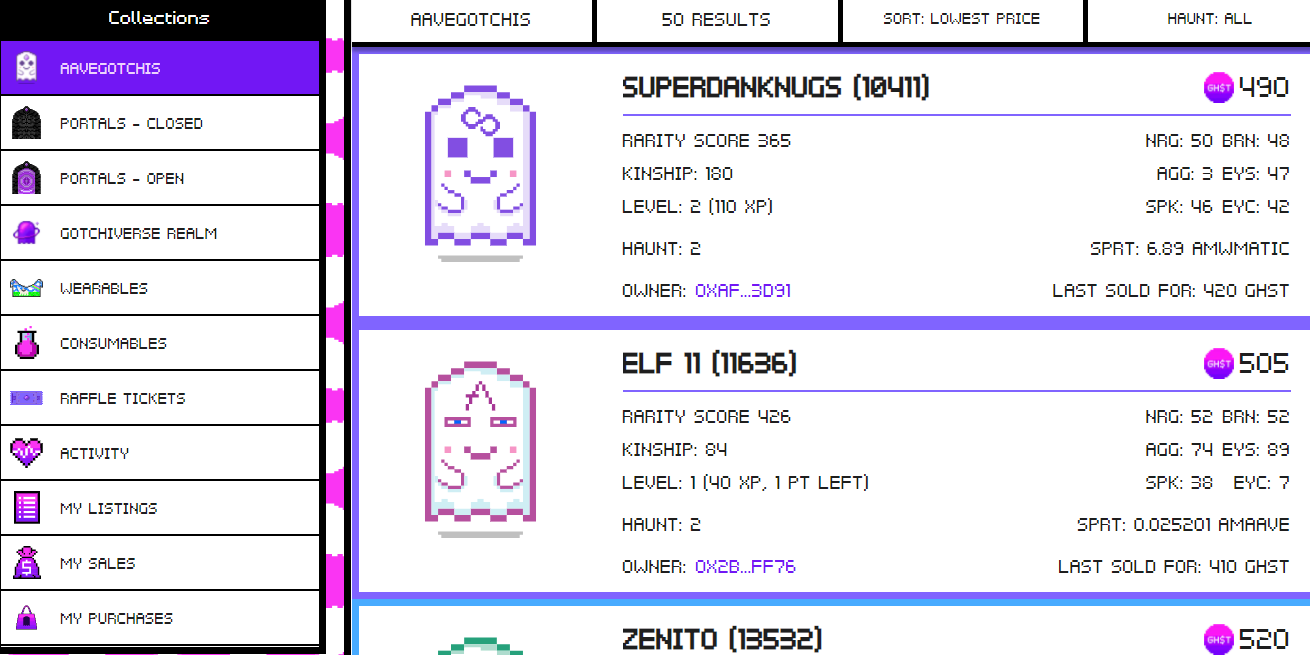 Aavegotchis on sale in the bazaar

Before apeing in, consider your options:

Once you have acquired a gotchi, take action:

We have mentioned the GHST ecosystem and governance token repeatedly. Buying it is a simple way to get Aavegotchi exposure. Issued via a bonding curve, GHST has seen lower volatility than comparable metaverse tokens, both on the up and downswings. The best way to buy GHST is directly on Polygon, via QuickSwap or an aggregator like Slingshot.

Here is an overview of token utility:

The Gotchiverse is not live yet, but sales of “REALM” ERC721 NFTs representing individual land plots have already started. Getting some prime real estate early might be a smart way to get exposure to the ecosystem. 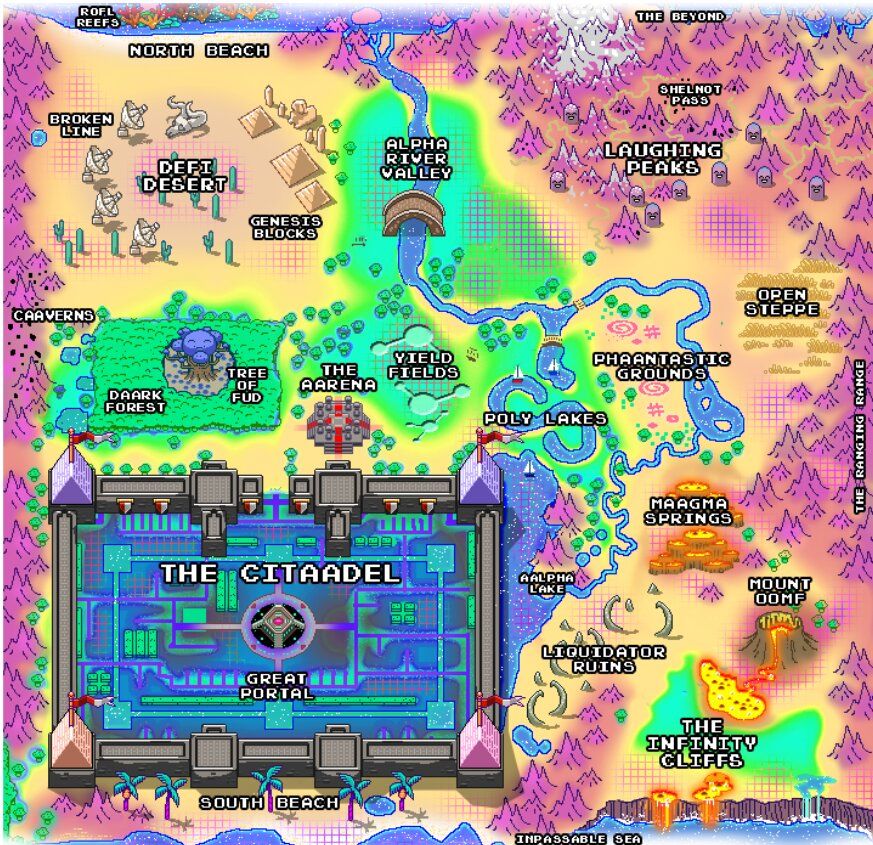 Here are some key facts you need to know:

So, how to get your hands on REALM plots and what to take into account?

What is next for Aavegotchi?

The biggest project milestone yet will be the release of the Gotchiverse, planned for January 2022. This is what the team has been working towards from the very beginning and expectations are high. According to the Gotchiverse litepaper, it will provide an “open-ended social space where players can engage in myriad activities, such as farming, crafting, trading, and combat.”

We can expect a limited alpha version upon initial launch, focusing on enabling the core gameplay for the Citaadel area, in particular farming and trading Alchemica. Functionality will then be added iteratively and the map will be expanded beyond the Citaadel, to the “Grid” area where REALM prices will probably be lower and everyday life for your gotchis slightly tougher.

Scaling the player base beyond the owners of expensive NFTs is a key challenge for all blockchain games. The Aavegotchi roadmap contains two innovative approaches to tackle this:

If you made it to the end of this post, you will probably share our view that Aavegotchi is a highly promising ecosystem. At the interface of NFT, DeFi and Metaverse plays, it checks all recent hype boxes and has at least a partially working product, which may turn into a full-blown metaverse in 2022. Exciting times to come!

What is $MEME protocol and how do I get MEME NFTs?

The MEME token story is a story only crypto can produce. From a joke to a multi-million dollar projects within hours. Learn about the MEME protocol and how you can use it to farm rare NFTs.